There is little doubt that the field of oncology, the study and treatment of cancerous tumors, is of paramount importance in the modern day. Current treatments vary in their effectiveness and invasiveness, and there is (as of yet) no clear “magic bullet” approach. The three main approaches are: operating to directly remove the tumor, chemotherapy or radiotherapy. Of these, radiotherapy is possibly the least invasive of the three, if used efficiently. Professor Hiroki Shirato and his team at the Hokkaido University Hospital are dedicated to advancing the field of radiotherapy, and ultimately saving lives. 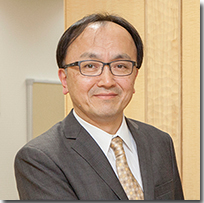 Radiotherapy normally involves firing high energy ionizing X-rays into tumors to damage the DNA of the cancerous cells, leading to eventual cellular death. The unfortunate by-product is that the X-ray beam can irradiate nearby healthy cells, both in the immediate area surrounding the beam and as it exits through the body. This is especially problematic for tumors larger than roughly 5cm, which require such high doses that the damage to surrounding healthy tissue becomes dangerous.

Prof. Shirato’s Quantum Medical Science and Engineering (QMSE) group are instead focused on the use of proton beams (positively charged subatomic particles). Protons are accelerated to a specific energy and directed into the body. Due to the massive nature of protons (X-rays instead have zero mass) their paths are much harder to deviate, reducing the exposure to surrounding tissue by scattering within the body. They also have a very well defined stopping distance determined by their initial energy (a point known as the “Bragg peak”), allowing the beam to stop at the tumor and deliver the majority of the dose at that location. X-rays in comparison continue to irradiate cells on their route out of the body and deliver stronger dosages before they reach the tumor.

This much more precise approach makes proton beam therapy a considerably more attractive option than X-rays, especially when the target area neighbours other vital organs. Japan has become one of the world leaders in the field of proton therapy, with currently more than 10 proton beam facilities (second only to the USA1) out of only 50-60 facilities worldwide. 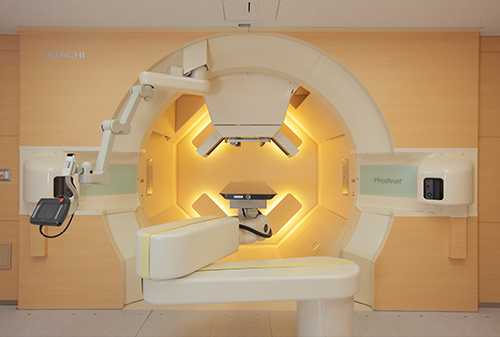 Interior of the treatment room

With such a refined radiation beam it is extremely important to identify the location of the tumor. The body is a dynamic and shifting system, with cardiac, respiratory and digestive systems continually moving. This causes the location of tumors to move from 5mm to 2cm even when the patient is stationary, and predicting such motion is very difficult. To tackle this issue, QMSE has developed a real-time tumor tracking system to locate the tumor at any given time. First a 2mm golden tagging marker is placed upon the tumor, and then tracking systems allow for the 3-dimensional position of the tumor to be determined 30 times every second. The proton beam then waits for the tumor to move into the firing range and then delivers the radiation to the required depth. While such tumor tracking systems have been utilized for X-ray therapy in the past, its implementation with proton beam therapy was pioneered by the team at Hokkaido University. Their proton beam facility is a joint construction project by the University’s own engineers and those at Hitachi, with strong science collaborations with Stanford University in the USA. Treatments with this system began just a year ago, with two other departments (Kyoto Prefectural & John Hopkins hospitals) deciding to install similar proton beam with real-time tracking facilities.

Proton beam therapy is still relatively new compared to X-ray therapy, having only moved on from a theoretical field 10 years ago. One difficulty is attaching the marker to the tumor in the least intrusive way possible. The QMSE group is working on cutting edge research that aims to remove the invasive marker implanting procedure entirely, for example, using an injected liquid marker that then transforms into the small gold marker when it reaches the tumor. 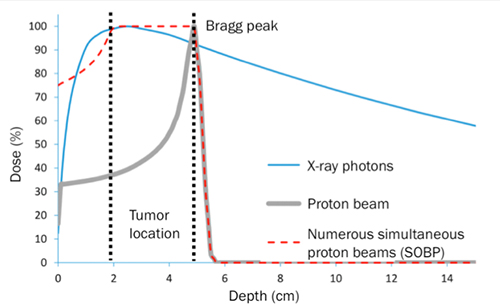 Figure showing the radiation dose of different radiotherapy techniques at increasing depths within a target tissue . X-rays deliver considerable dosage in the area surrounding the tumor, whereas the proton beam has a much slower increase and allows for a strong concentration at the target area with almost non-existent dosage after the tumor. Using numerous simultaneous proton beams of different energies you can create a spread out Bragg peak (SOBP) and irradiate the entire length of the tumor.

While successful proton-based radiotherapy treatment is already showing excellent promise compared to alternative therapies, Prof. Shirato and the researchers at QMSE are continuing to make the already low-risk treatment a minimum-risk one, by the use of highly refined and directed proton beams and real-time tumor tracking technology. 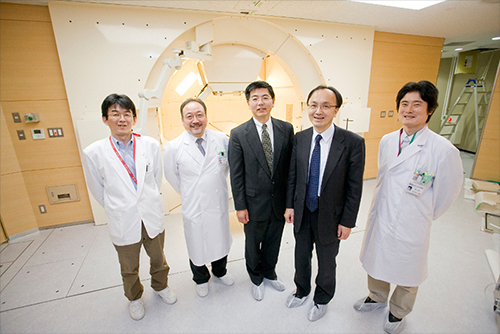