80 years ago, Hokkaido University professor, Ukichiro Nakaya, created the world’s first artificial snowflake. Nakaya referred to snowflakes as ‘letters from the sky’ since their tumbling descent brought information about the conditions in the upper atmosphere. This research on glaciology marked the start of Hokkaido University’s interest in the Arctic.

While Japan is not an Arctic country, it is strongly affected by the environmental changes in the polar region. As the Arctic sea shrinks, the summertime sees the Northern Sea Route open for longer stretches, allowing cargo ships to pass between Europe and Asia. At the mouth of the passage’s Asia side, sits Japan. In 2012, the first freighter sailed from Europe to Japan using the Northern Sea Route. The commercial and environmental consequences give Japan a strong interest in Arctic changes and in May 2013, Japan became an ‘Observer’ on the Arctic Council; an international organisation to assist in Arctic issues. 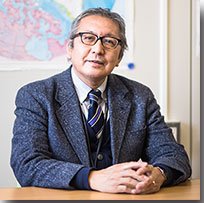 Japan has three national centres focussed on Arctic activities. Two of these, the Japan Agency for Marine-Earth Science and Technology (JAMSTEC) and the National Institute of Polar Research (NIPR) focus primarily on the natural science viewpoint of Arctic change. But environmental change is a very human problem, both in its cause and the consequences for economic activities and the livelihood of the Arctic communities. For this reason, the Arctic Research Center at Hokkaido University was started in April 2015 to bring together research in social science, humanities and natural science to explore the consequences of Arctic change.

Research at the Arctic Research Center is divided into six subcategories:
(1) The ‘Atmosphere and Hydrosphere Research Group’, which focuses on climate change, sea ice and the marine ecosystems.
(2) The ‘Terrestrial Research Group’, where members examine the permafrost and the genetic diversity in mammals, fishes and plants.
(3) The ‘Cryosphere Research Group’, with a special interest in the Greenland ice sheets and Arctic glaciers.
(4) The ‘Practical Research Group’, which looks at engineering aspects of utilising the Northern Sea Route and takes advantage of Hokkaido’s snowy weather to investigate architecture suitable for cold climates.
(5) The ‘Social Science and Humanities Group’ that focuses on the impact of environment and economic change on the people living in the Arctic and the social-economic impact of changes to the Northern Sea Route.
(6) The ‘Satellite Observation and Modeling Research Group’, which is concerned with modelling climate change and mapping out the future. 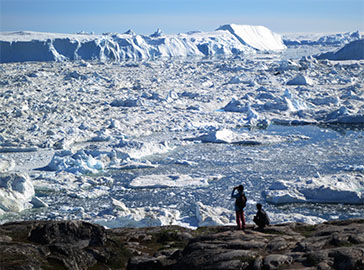 One example of a recently funded project explores the balance between permafrost and human activity in Yakutia in eastern Siberia. The region has been experiencing rapid economic growth, leading to larger requirements for winter heating. The result has both economic and environmental consequences. An increase in demand escalates the price of fuel to unaffordable levels for the local people. Meanwhile, the rise in carbon dioxide from fuel combustion cannot be compensated by the permafrost, which acts as a key sequester of that greenhouse gas in the Siberian ecosystem. The project aims to find possible ways to tackle both the unaffordable cost of living and the carbon dioxide emission.

These trans-disciplinary research areas are complemented by plans for exchanging information through education and international conferences. A new initiative in Japan, the Japan Arctic Research Through Network (J-ARC Net), is headed by the Arctic Research Center to foster the community of Arctic researchers within Japan through regular symposia and meetings. The centre also has short and long-term programs to send faculty and students to Arctic countries for between two weeks to one year. Hokkaido University is also a member of the University of the Arctic, which is a coalition of higher education institutes focussed on research and education on Arctic activities.

The sea ice linchpin for ecosystems

The director of the Arctic Research Center is Professor Sei-Ichi Saitoh. His recent research has explored the spread of phytoplankton microscopic organisms as a measure for Arctic ocean conditions. At the bottom of the food chain, the abundance of phytoplankton controls the populations of larger predators from zooplankton like krill to larger fish species.

Two types of phytoplankton that are found in the Arctic ocean are the Haptophytes, which are 0.002 mm across, and the larger Chaetoceros Socialis at 0.14 mm across. While both tiny, the relative size difference between these microorganisms is equal to that of a common clown fish and a killer whale. Working on the Hokkaido University’s research training vessel, the Oshoro-maru, Saitoh discovered that the distribution of the two species can be measured from space due to the differences in their optical properties.

The green chlorophyll in the phytoplankton partially absorbs the incident sunlight and scatters the rest. The smaller Haptophytes phytoplankton absorb more strongly at small wavelengths around 488 nm (cyan) compared to the larger Chaetoceros Socialis. By contrast, light at 555 nm (green) is absorbed and scattered equally by both types. Saitoh developed a model to estimate the ratio between the two phytoplankton types based on the absorption data collected from satellites. He found that the smaller phytoplankton were distributed equally over the seas around the globe, but the larger species clustered densely along costal regions. While comparing satellite images from 1978 and the present day, Saitoh turned his attention to the Arctic region. 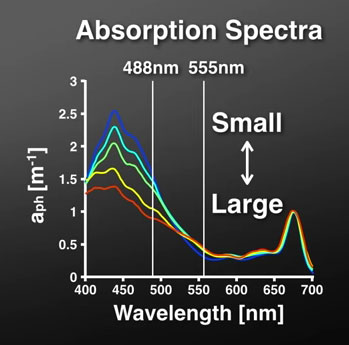 The reason for this stems from where the phytoplankton live. The large Chaetoceros Socialis are sometimes referred to as ‘ice algae’ due to their favourite location at the bottom of sea ice. Take away the sea ice and you destroy their habitat. The knock-on effect up the food chain is that where sea ice is plentiful, krill collect to feed. This brings in larger creatures such as whales. The sea ice is also used by polar bears to hunt seals. The loss of sea ice therefore marks the destruction of a large ecosystem.

Global warming is drastically shifting the marine ecosystems in the Arctic ocean. The decrease of sea ice affects the balance of phytoplankton, disrupting the food chain. Warming ocean temperatures also move cooler-loving organisms further north in search of colder waters. But for those already in the Arctic, there is no where to go. Not only is the loss of marine life tragic, but such movement presents serious economic consequences for the countries that depend on the fisheries.

Concerns for the future

Not all changes in the Arctic conditions have a short-term negative impact on the economy and that in itself presents problems. The Arctic region is thought to contain a significant amount of untapped natural gas and petroleum resources. As the sea ice recedes, these areas become accessible, promoting fears that the fresh abundance of fossil fuels will accelerate carbon dioxide emissions and cause still more global warming.

The Arctic Research Center at Hokkaido University aims to be working at the heart of these issues. The new centre currently has 22 faculty with another 10 to be hired before April 2016. This is an international initiative to match the international problem, with both permanent research staff and postdoctoral fellows from around the world.