Spotlight on Research #5 : Can you catch your dog’s illness? 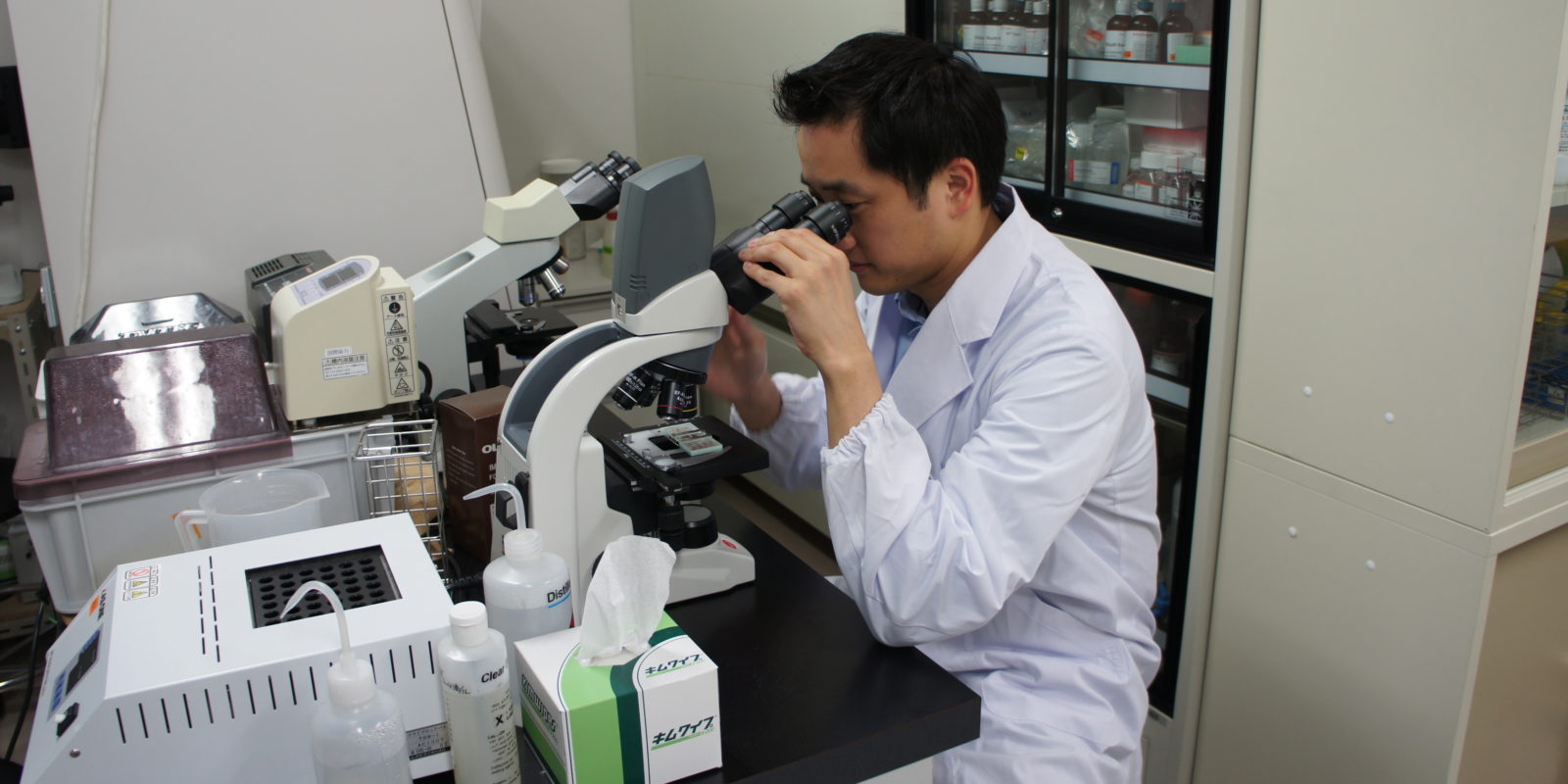 The Research Center for Zoonosis Control is concerned with the probability that you will catch a disease from your dog. Or –to put it more generally– zoonosis looks at the transmission of diseases between humans and animals.

While we do not normally consider an illness in an animal a risk to humans, you can almost certainly name a number of exceptions: Severe Acute Respiratory Syndrome (SARS), avian Influenza (bird flu), rabies, Escherichai coli (E. coli ) and Creutzfeldt-Jakob disease (CJD), to offer a few examples.

Diseases can be produced by different types of agents: viruses, bacteria, prions (a type of protein), fungi and parasites. Postdoctoral researcher, Jung-Ho Youn, is interested in the second of these types; diseases caused by bacteria.

Bacteria, Jung-Ho explains, are everywhere and most are harmless or even essential to our health. For the bacteria which do cause disease, treatment usually involves antibiotics.

In 1928, Scottish scientist Alexander Fleming discovered that a sample of the disease-producing bacterium, Staphylococcus aureus (S. aureus), had become contaminated by a mould which was inhibiting its growth. This fungus turned out to be producing a substance that would later be known as the antibiotic, penicillin. So successful was penicillin at treating previously fatal bacterial diseases that it was hailed the ‘miracle drug’.

Yet, 85 years later we are far from celebrating the demise of all bacterial illness. Indeed, a variant of the very bacteria Fleming was studying can be a serious problem in hospitals due to its strong resistance to many antibiotics.

So what went wrong?

The problem, Jung-Ho explains, is that bacteria are continuously changing. With the ability to divide in minutes, bacterial numbers can rise exponentially and these microorganisms are not always identical. Random mutations to the genetic structure of a bacterium usually have little effect but a small number of cases can arise that produce a spontaneous resistance to the drug set to kill them. For example, the bacteria’s surface may change to prevent the antibiotic bonding or it could reduce the build up of the drug by creating a pump to dispel it from its system. These changes are the same principal as evolution in mammals but on a much faster time scale due to the bacteria’s fast reproduction. This means that when a sick person takes a course of antibiotics such as penicillin, they kill most but not all of the bacteria.

But the problems with bacteria do not stop at the ability to develop resistance once exposed to a drug. Not only can a resistant bacterium multiply to produce more bacteria will the same protection, it can share this information with different types of bacteria. The bacteria that gain this protection may never have been exposed to the antibiotic and –a key issue for zoonosis– they may not even cause disease in the same species.

Jung-Ho’s research is with Staphylococcus pseudintermedius (S. pseudintermedius), a bacteria commonly found in dogs. While playing with your pet, this bacteria can transfer onto your skin where it can meet the human variant, S. aureus; the same bacteria Fleming was studying during his discovery of penicillin.

“Normally there are no problems,” Jung-Ho assures animal lovers. “You don’t need to get rid of your pet. It’s just in some cases…”

How can this spread of resistance between animals and humans be prevented? The first step, Jung-Ho explains, is to find out where these antibiotic resistant bacteria are and how they are spreading.

Jung-Ho describes an experiment conducted in a veterinary waiting room. Swabs are taken from the patient pets, veterinary surgeons and the environment, such as the waiting room chairs and computers. The bacteria are then analysed to see if the same microorganism variant (or ‘strain’) is found in more than one place. For example, if the same bacteria strain are found on the vets’s skin and the dog, this suggests transmission is occurring between the two parties.

The direction of this transmission (vet to dog or dog to vet) is not possible to determine, but in the case of S. pseudintermedius, Jung-Ho knows it is predominantly found on dogs, so must be moving from animal to human. If a large quantity of this bacteria is also found on the furnishings of the clinic, it is likely that significant extra transmission is occurring by people touching their keyboard or chair, even if they have never interacted with an animal. This kind of spread can then be prevented by sterilising the area more thoroughly: a find that can reduce disease and the spread of resistant bacteria.

This approach sounds straightforward until the sheer number of bacteria are considered. Even when narrowed down to a specific strain, it is not immediately obvious whether the bacteria found have the same source, or if they have originated from entirely different locations. Jung-Ho described two main methods for checking to see if the samples are the result of a single transmitted population:

(1) The identification of ‘Housekeeping genes’. These genes are particular to a bacteria type and essential to its survival, resulting in these genes being present in each cell of the microorganism. For Staphylococcus bacteria, there are seven housekeeping genes but their order may differ between bacteria populations. By identifying these genes in bacteria found in different locations, scientists can establish if they were transmitted between the two places. This technique is known as ‘Multilocus sequence typing’ or MLST.

(2) The use of another molecule that cuts the bacteria’s DNA into pieces. Called ‘Pulsed-field gel electrophoresis’ (PFGE) this technique is also used in genetic fingerprinting to identify an individual from their DNA. In this case, the bacteria’s DNA is sliced using a gene cutting enzyme that only produces the same pieces if the bacterial populations are identical.

Jung-Ho points out that such methods –while effective– are cumbersome compared with the prospect of being able to sequence the whole DNA of a bacteria. He hopes that with the new generation of machines capable of quickly finding complete gene sequences, it will become easier to track the antibiotic resistant bacteria. This will not only allow scientists to minimise infection but also warn doctors that a disease may be resistant to certain drugs. Such an early detection of the bacteria type can save vital time when treating a patient.

One of the difficulties with this research is that it sits between human and animal medicine. Jung-Ho’s own background is in veterinary science, yet to understand the bacterial spread across species he must now gain expertise on the medical side.

“It is a big question in zoonsis research,” he explains. “Who should do it? Doctors or vets? Someone has to, I think.”