Spotlight on Research #8: Reactions in the coldest place in the galaxy 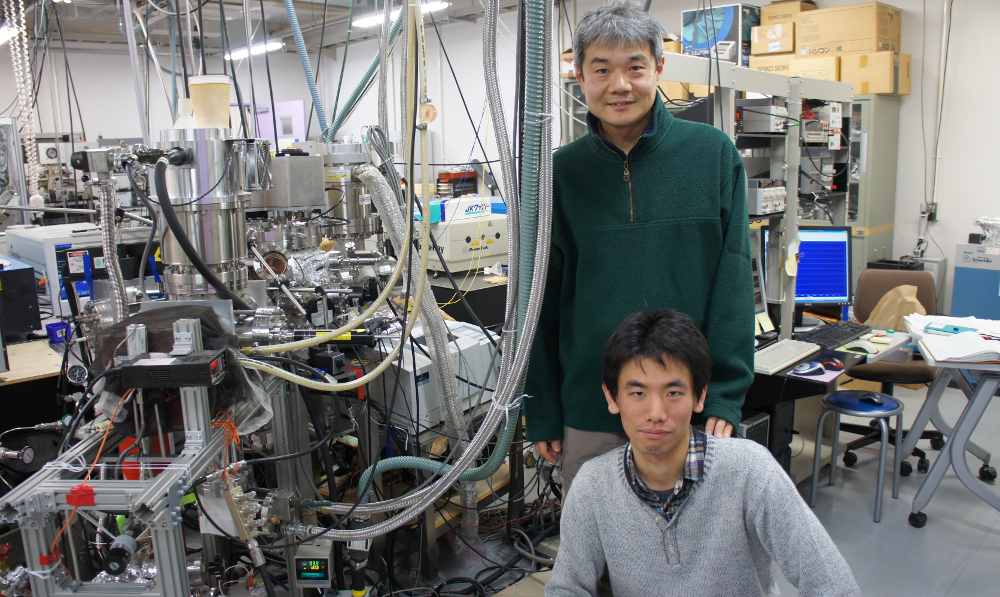 Within the coldest depths of our galaxy, Naoki Watanabe explores chemistry that is classically impossible.

At a staggering -263°C, gas and dust coalesce into clouds that may one day birth a new population of stars. The chemistry of these stellar nurseries is therefore incredibly important for understanding how stars such as our own Sun were formed.

While the cloud gas is made primarily from molecular (H2) and atomic (H) hydrogen, it also contains tiny dust grains suspended like soot in chimney smoke. It is on these minute surfaces that the real action can begin.

Most chemical reactions require heat. In a similar way to being given a leg-up to get over a wall, a burst of energy allows two molecules to rearrange their bonds and form a new compound. This is known as the ‘activation energy’ for a reaction. The problem is that at these incredibly low temperatures, there’s very little heat on offer and yet mysteriously reactions are still happening.

It is this problem that Professor Naoki Watanabe in the Institute of Low Temperature Science wants to explore and he has tackled it in a way different from traditional methods.

“Most astronomers want to work from the top down,” Naoki describes. “They prepare a system that is as similar to a real cloud as possible, then give it some energy and examine the products.”

The problem with this technique, Naoki explains, is that it is hard to see exactly which molecule has contributed to forming the new products: there are too many different reactions that could be happening. Naoki’s approach is therefore to simplify the system to consider just one possible reaction at a time. This allows his team to find out how likely the reaction is to occur and thereby judge its importance in forming new compounds.

This concept originates from Naoki’s background as an atomic physicist, where he did his graduate and postdoctoral work before moving fields into astrochemistry. Bringing together expertise in different areas is a primary goal for the Institute of Low Temperature Science and Naoki’s group is the top of only three in the world working in this field.

Back in the laboratory, Naoki shows the experimental apparatus that can lower temperatures down to the depths of the galactic clouds. Dust grains in the clouds are observed to be covered with molecules such as ice, carbon monoxide (CO) and methanol (CH3OH). Some of these can be explained easily: for instance, carbon monoxide can form from a positively charged carbon atom that is known as an ion (C+). The charge on the ions make them want to bond to other atoms and become neutral, resulting in no activation energy being required. A second possible mechanism is by a carbon atom (C) attaching to a hydroxyl molecule (OH): a particularly reactive compound known as a ‘radical’ due it possessing a free bond. Like the charge on the C+, this lose bond wants to be used, allowing the reaction to proceed without an energy input. These paths allow CO to form in the cloud even at incredibly low temperatures and freeze onto the dust.

However, methanol is more of a mystery. Since the molecule contains carbon, oxygen and hydrogen (CH3OH), it is logical to assume that initially CO forms and then hydrogen atoms join in the fun. The problem is that to add a hydrogen atom and form HCO requires a significant activation energy, and there is no heat in the cloud to trigger that reaction. So how does the observed methanol get formed?

Naoki discovered that while the low temperature prevented HCO forming through a thermal (heat initiated) reaction, it was that same coldness that opened the door to a different mechanism: that of quantum tunnelling. According to quantum mechanical theory, all matter can behave as both a particle and a wave. As a wave, your position becomes uncertain. Your most likely location is at the wave peak, but there is a small chance you will be found to either side of that, in the wave’s wings.

Normally, we do not notice the wave nature of objects around us: their large mass and energy makes their wavelength so small this slight uncertainty goes unnoticed. Yet in the incredibly cold conditions inside a cloud, the tiny hydrogen atom starts to show its wave behaviour. This means that when the hydrogen atom approaches the carbon monoxide molecule, the edge of its wave form overlaps the activation energy barrier, giving a chance that it may be found on its other side. In this case, the HCO molecule can form without having to first acquire enough heat to jump over the activation barrier; the atoms have tunnelled through.

Such reactions are completely impossible from classical physics and the chance of them occurring in quantum physics is not high, even at such low temperatures. This is where the dust grain becomes important. Stuck to the surface of the grain, reactions between the carbon monoxide and hydrogen atom can occur many many times, increasing the likelihood that a hydrogen atom will eventually tunnel and create HCO.

After measuring the frequency of such reactions in the lab, Naoki was then able to use simulations to predict the abundance of the molecules over the lifetime of a galactic cloud. The results agreed so well with observations that it seems certain that this strangest of mechanisms plays a major role in shaping the chemistry of the galactic clouds.