Complex systems which either form visible or invisible patterns are entities with multifarious behaviors and learn and change over time according to their surroundings. Understanding the relationship between singular elements, or nodes, within these systems is an approach being used by scientists worldwide to help solve many of the problems modern society is facing today—climate change and emerging diseases for example. 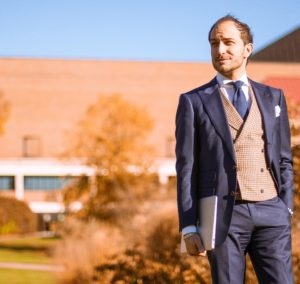 Associate Professor Matteo Convertino of the Graduate School of Information Science and Technology develops mathematical models based on complex network and information theory to understand collective phenomena; in particular how nodes communicate with each other and how complex networks change over time and space. He is in the midst of writing a book underlining the necessary (critical) information needed to comprehend such complex systems titled “Critical Values: Collective Information and Decision Analytics,” and is working on a variety of perhaps at first seemingly unrelated projects to impact the lives of people worldwide.

One of these projects is a collaboration with the Minnesota Aquatic Invasive Species Research Center in the USA to develop a cell phone application which can map—real-time—the presence of zebra mussels, a freshwater invasive species which damages boats, infrastructure and ecological communities; this app could be used in a way similar to checking the weather on your phone and is connected to predictive models developed by Dr. Convertino’s group. Another project he is working on is about how bacteria forming the microbiome in our bodies affect bodily abnormalities such as infections and chronic diseases.

Dr. Convertino’s approach is to focus on and increase positive nodes within a complex system versus eliminating negative ones. In the two examples above, this would be increasing the presence of other freshwater species to combat the invasive species instead of directly attempting to eliminate the invasive species, and enhancing good bacteria in the microbiome versus targeting the harmful disease-specific bacteria.

“This science I am interested in looks at universal patterns using novel network and information models,” Dr. Convertino explained, “If you understand these patterns, you can apply the same solution more or so anywhere.”

Simulated swarm representing complex systems. Each blue and red node can represent a person, bird, fish, or anything else that is collective and highly varying. In this case they represent drones.

Another project that Dr. Convertino is particularly excited about is his work on engineering micro-drones to collectively fly in a flock like birds. “No one has ever succeeded in making drones fly themselves like birds in a way in which they learn from the environment and are constrained to a mission. Usually, drones are instead controlled independently.” Dr. Convertino remarked. Birds have a variety of different flock formations based on factors such as environmental conditions and purpose of the flight. As a collective, they adapt to their surroundings to achieve a goal. Dr. Convertino is generating a mathematical model giving drones this ability to adapt to their environments and complete missions accordingly. Programming this sort of “AI’’ for drones has an infinite amount of applications: delivering packages, monitoring inaccessible areas, controlling agricultural fields from pests, and cyber-surveillance to name a few.

Through Hokkaido University’s Global Station for Big Data and Cybersecurity, GI-CoRE, Dr. Convertino and his collaborators will be conducting experiments in one of the world’s largest aerospace testing facilities at the University of Technology Sydney. In addition to flying drones under different noise conditions, they plan to conduct experiments that force the drones to consider unseen variables, such as incoming objects or the sudden appearance of items they need to obtain. The idea is that the drones will fly themselves, sense each other, and collectively reconfigure based on their long-term and short-term missions and noise. Although these missions can be pre-programmed, the drones are given a certain amount of freedom so they can change their actions without human intervention.

Dr. Convertino stressed the importance and the influence of considering the big picture when he conducts his research and that he always looks for ways he can use his knowledge of complex systems to impact large amounts of people. “If my technology can help millions of people, then that would be wonderful!” he exclaimed.