“The earth is suffering from several ‘diseases’: global warming, ocean acidification, habitat loss, etc. If any of these diseases remains uncured, other diseases will accelerate and cause new ones to appear, hence putting humanity’s well-being in danger,” said Associate Professor Masahiko Fujii. For this reason, the research staff of the Faculty of Environmental Earth Science keeps on assessing the current global environmental issues and promoting renewable energy sources as a possible solution. 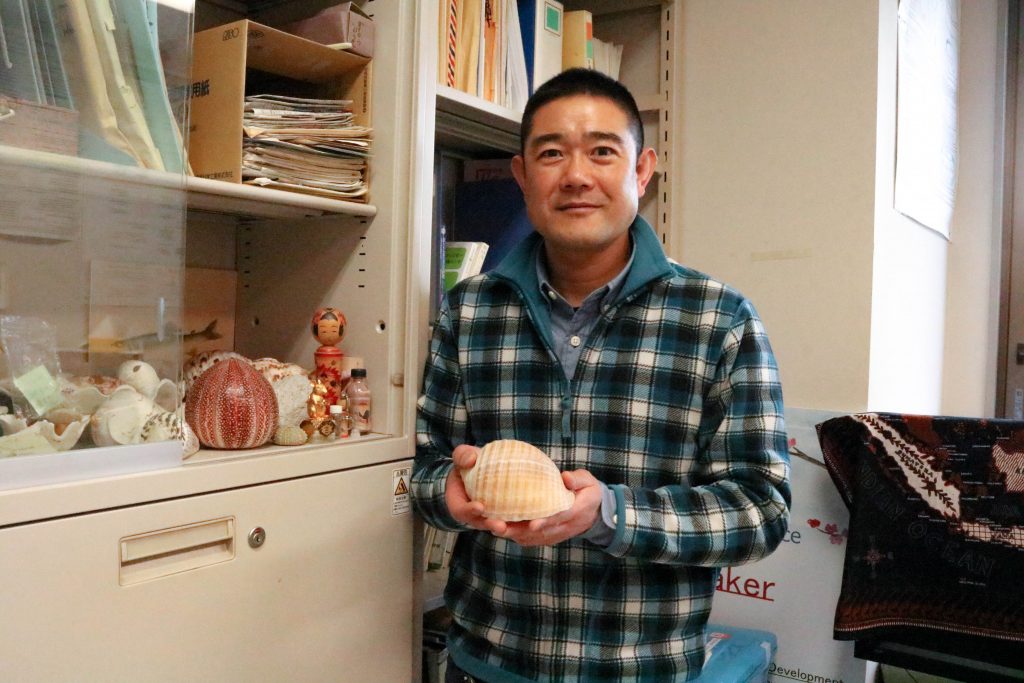 “For many years, we have been concerned about global warming, but in most of those years, we overlooked its effect on the ocean and what lies beneath. The initiatives to look into ocean acidification just started in the early 2000s,” added Fujii.

Fujii explained that ocean acidification is the increasing acidity level of the ocean, primarily due to the increasing carbon dioxide (CO2) concentration in the atmosphere. Ideally the ocean should maintain a pH level of 8.06 on the average, which indicates a weak alkaline level. The pH scale ranges from 1 to 14, with 7 being neutral. Anything below 7 indicates acidity whereas anything above 7 is alkaline.

However, recent studies have shown that the pH level of the ocean keeps on decreasing, indicating that the oceans are becoming towards neutral or acidic. According to Fujii, one problem that entails is the imbalance of oceanic ecosystems, triggered by the gradual destruction of sea organisms, especially those that are composed out of a high-level calcium carbonate (e.g., shells, sea urchins, coral reefs). The less alkaline ocean limits the growth and even corrodes the bodies of these creatures.

Apart from ocean acidification, marine life is also facing ocean warming and overfishing. These three are closely correlated and cause severe outcomes in the future. Fujii simplified the idea of the severe consequences through the featured visualization of the variants of sushi. There are 10 different types of sushi featured in the photo, each is made of different ocean creatures. The missing variety indicates the creatures in danger as the consequence of the corresponding problem. 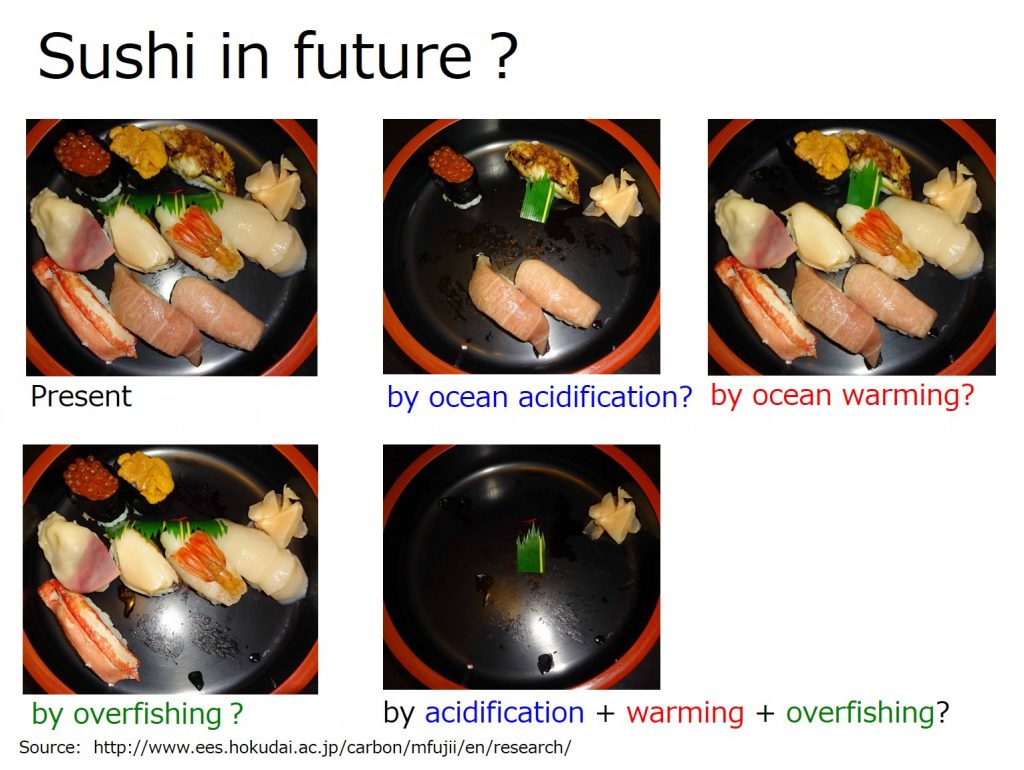 Consequences of marine environmental issues as represented in sushi. (Photo by Masahiko Fujii)

Fujii sees that the major factor of the increasing CO2 concentration is human activities; people have been over-relying on fossil fuels, such as coal, oil and natural gas. Furthermore, not only do they emit CO2, but they are also exhaustive resources. He proposes the idea of renewable energy as the best way to solve this issue. However, his observations prove that it is not that easy. He thinks that every area has different resources and therefore also differs in the renewable energy potentials. Thorough research and planning are required.

In one of Fujii’s research projects, he looked deeper into the compromised three-way relationship between three essential elements in human activities: water, energy, and food. He further illustrated the concept by using installation of solar panels in desert areas as an example.

“It is a given that desert areas could generate an abundance of power from solar panels. This generated power could be used for the agricultural industry and many others. However, we need to remember that cleaning those panels requires an abundance of water in return,” said Fujii, who is using the term “Nexus” to refer to this trade-off. With several other researchers of five different countries (the Philippines, Indonesia, Canada, USA, and Japan), Fujii had joined the “Water-Energy-Food Nexus Project” which was concluded in 2018.

“Even if we manage to resolve the conflict between the resource and the method of installing the source, social conflict might occur,” Fujii elaborated. “Take Indonesia as an example, which has the highest potential to generate geothermal energy sources compared to other countries in the region; several attempts to install the system have been opposed by the locals since it would require deforestation.”

In Japan, specifically in Hokkaido, an attempt to establish renewable energy sources has been conducted in an ongoing project called “Hokkaido Energy Change 100 Network”. Fujii pointed out that the initiative was triggered by the 2011 Tohoku earthquake. The disaster also impacted the Tomari Nuclear Power Plant of Hokkaido. Before the earthquake it had supported 43% of Hokkaido energy supply, but the operation has been suspended since 2012, which further motivated Fujii to develop other methods of alternative energy supply. Being involved in the project as a researcher, Fujii revealed the general goal of this initiative, which is to cut the CO2 emissions in Hokkaido by up to 35% before 2030. 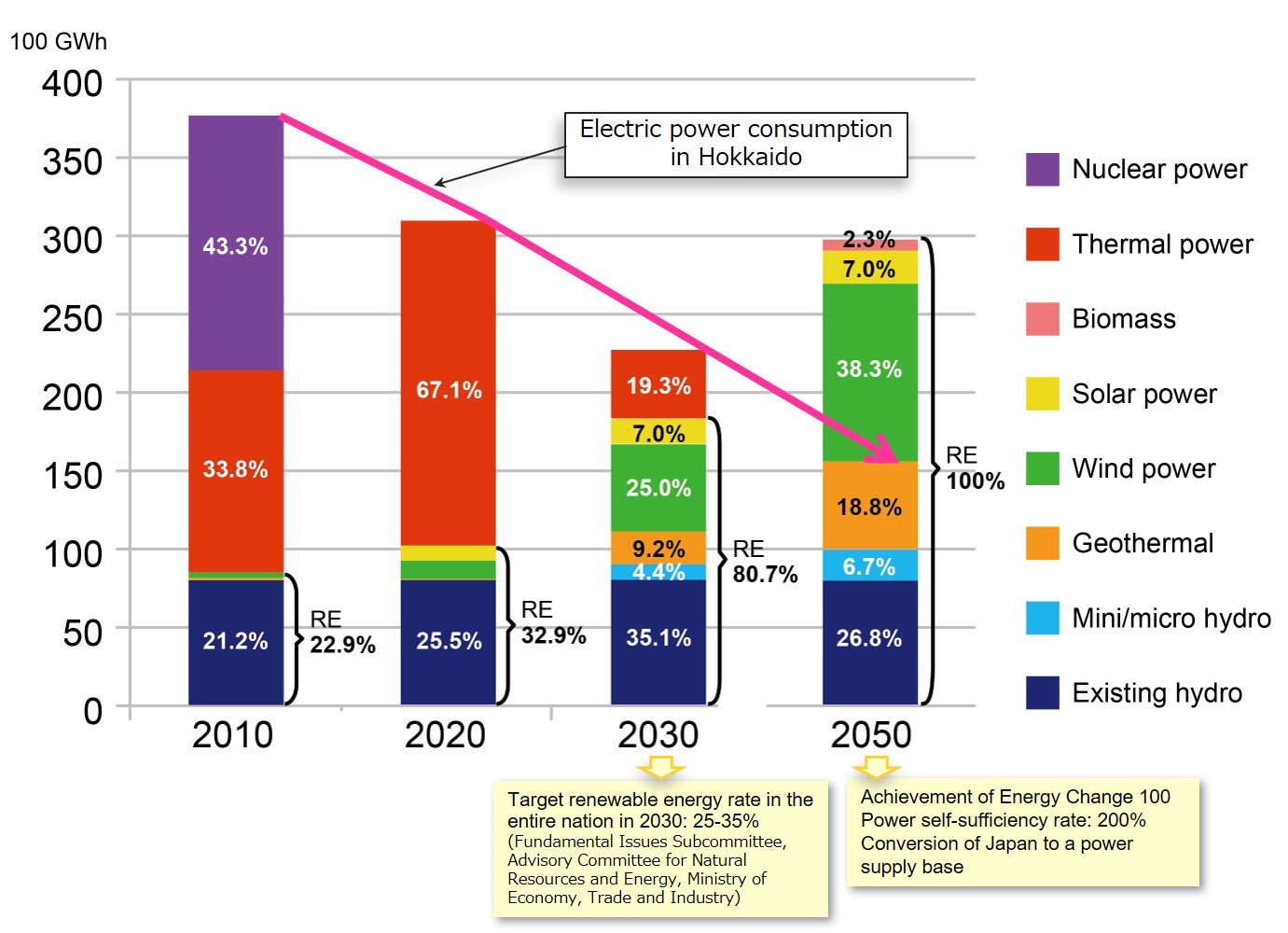 “The environmental impacts aside, the effects of keeping using fossil fuels on the economy will be more noticeable in the future,” added Fujii. “Japan imports their fossil fuel, which puts a burden on the economy. If we combine the issue with the aging population, the Japanese government will have more expenditures in the future since they will need to support the senior citizens as well. So, finding and installing our own alternative energy source should be a solution.”