Spotlight on Research: How accurate is your color perception? 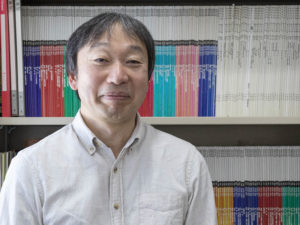 Professor Yasuhiro Kawabata with the Department of Psychology loves mountaineering. It is during one of his trips as a Hokkaido University student to the Himalayan Mountains that he noticed how much people’s sensitivity to and perception of color shapes how they see the world.

“While climbing the mountain, our guide from the nearby village started talking about what we can see from our vantage point. He then pointed to something so small, something I could not see. ‘Look, there you can see the family of so and so,’ he said pointing downwards. My friend, who traveled with me from Hokkaido, replied saying he too can sort of see the humanoid figures moving… but I could not! As a student of psychology, I was always interested in perception, but that’s when I became interested in color specifically,” Dr. Kawabata explained.

Since then, Dr. Kawabata has been researching the ways in which people see and perceive colors.

Dr. Kawabata is a part of Hokkaido University’s Mountain Ski Club and organizes trips to pick wild mushrooms with a group of people referred to as “mushroom picking masters.” Picking mushrooms is a Hokkaido pastime, and the mushroom picking masters are people who, over the span of many years, regularly go out to the mountainsides for mushroom foraging. “These people are very used to seeing and handling mushrooms. This means they are more attune to their different colors,” Dr. Kawabata said smiling. “This is the concept I used for one of my recent color perception tests.”

The images shown during the Mushroom Picking Color Search Test. The outdoors environment photo (middle), which is shown for one second, is intentionally blurred to prevent participant incongruity.

The experiment is called the Mushroom Picking Color Search Test. The test participants are shown different colored mushrooms and are told they will need to find a color, which is then specified. Afterwards, they are shown a picture of colored mushrooms in an outdoors environment for one second before being asked where that colored mushroom is on a colorless version of the mushroom map.

The results of the test showed that, in general, when the color to find was mushroom-like (e.g. a shade of brown), the participants answered quicker and more accurately. The responses became slower and less accurate the further away the color was from a stereotypical mushroom (e.g. a blue mushroom).

When the same experiment was conducted with circle shapes, and not mushrooms shapes, speed and accuracy were unaffected by which color they were told to spot. “This,” explained Dr. Kawabata, “shows that the participants made a connection between real-life mushrooms and those on the computer.”

Two groups participated in the experiment: a group of Hokkaido University students shown to have average color sensitivity and a group of mushroom picking masters. Although the latter group were older, they had significantly higher results when they were told to find a mushroom of a mushroom-like color. However, the group of students performed better the further away the color was to a typical mushroom. 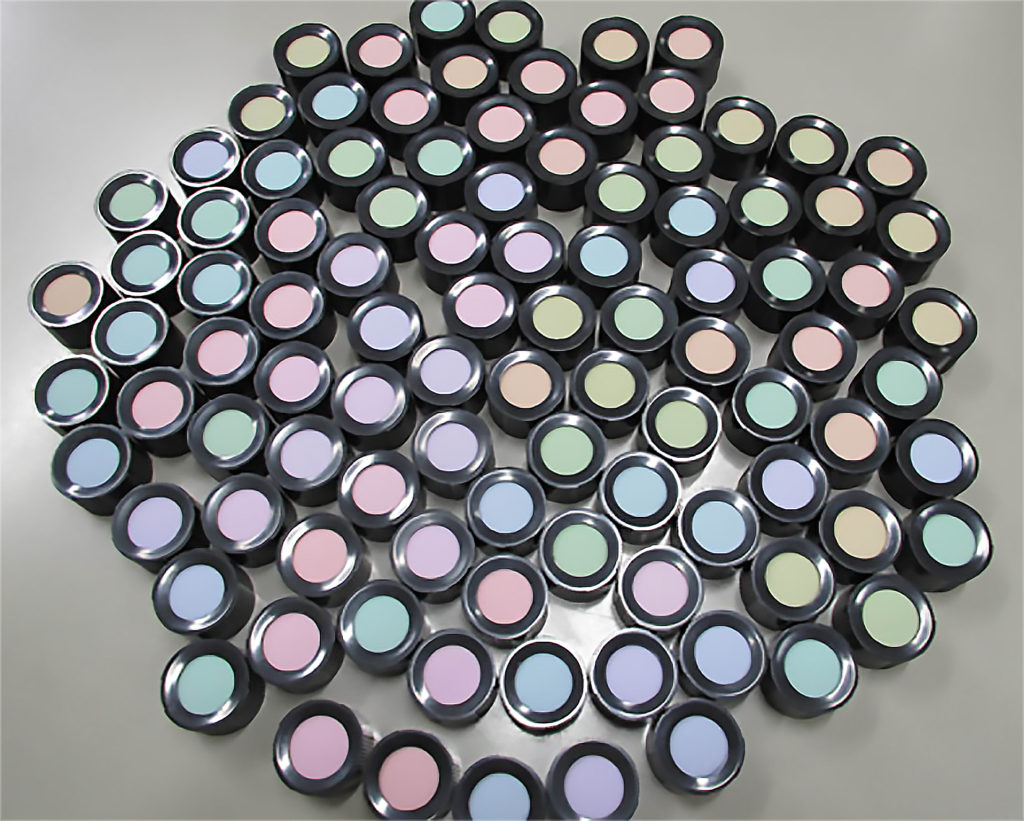 Participants are asked to arrange makeup pots by color gradient.

In another test, around 1,000 Hokkaido University students were asked to arrange 100 shades of makeup color pots by color gradient. Naturally, there was a range in the participants’ performances, but on average the women scored much more accurately than the men, especially to shades of pink and red. Dr. Kawabata is currently analyzing what factors may have contributed to the students’ scores. For example, their exposure to colors through their work and hobbies, whether they have a background in the arts, or use make-up affects their color acuity. 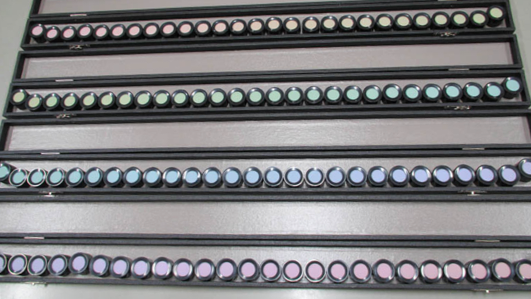 Would you be able to accurately arrange all of the makeup pots by color gradient?

“Our acuity to color shapes us without us knowing, and this is influenced by our very human nature. What I mean is, humans are trichromatic. We see in combinations of red, blue, and green. So, when we see yellow, it’s not because of the color receptors in our retinas, but because the back of our brains, the occipital lobe, interprets it as such.”

In the future, Dr. Kawabata plans to expand his research on color perception. In particular, he wants to look into how woodworkers are more acute to different colors of wood in comparison to those in other professions.

So, having done so much research into color, you may be wondering about Dr. Kawabata’s favorite color.

“The colors on the mountains,” he responded with ease. “There are colors you can’t experience when you’re in the city, but only on the snowy mountains—those blues and violets, and the changing mix as you ascend and the day goes by.” 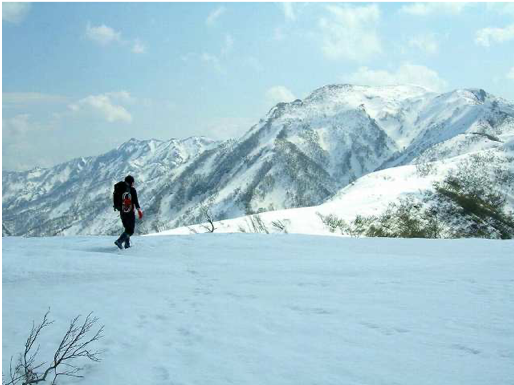 Faculty of Humanities and Human Sciences