Squid can fly? Flight behavior of the squid explained for the first time

Key points of the research results

– A sequence of photographs of the flying behavior of squid (from jumping out of to landing on water) were taken, and the details of those actions were revealed to the world for the first time.

– It was found that squid display highly sophisticated “flying behavior” that, instead of just jumping out of water, they increase speed by jet propulsion, create lift by spreading their arms and fins and land on water by controlling the lift.

– It is considered highly likely that the flying behavior of squid has developed as a means of escaping from predators.

Overview of the research results

When the Training Ship Oshoromaru of the School of Fisheries Sciences was out at sea, a sequence of photographs of squid jumping out of and landing on water were taken.  In this study, the behavior was divided into four stages, and the flying behavior was analyzed in detail.  As a result, it was revealed for the first time that the behavior of squid in the air was “flight behavior,” and that they change their form and posture purposefully instead of simply jumping out of water.

Overview of the research paper presentation

Magazine in which the paper was presented: Marine Biology (science magazine published by Springer Publishing Company in Germany)

Overview of the research results

The flight behavior of squid was observed during a visual survey conducted during a training cruise of the university’s Training Ship Oshoromaru (at 14:25 on July 25, 2011, 35°34.0’ N, 146°19.3’E, approx. 600 km east of Tokyo).  When the ship was navigating to the east at a speed of 12.8 knots, a shoal of some 100 squid jumped out of water twice, probably because they were surprised by the bow wave.  The process from jumping out to landing on water was photographed by Kota Muramatsu (Graduate student) and Dr. Keiko Sekiguchi (Cetacean researcher of International Christian University), and the flight behavior of squid was analyzed based on these photos.

The observed squid were young (small and immature) individuals of Ommastrephidae (relative of sagittated calamary), and were thought to be neon flying squid or purpleback flying squid.  They were approximately 203 to 225 mm (mantle length: 122 to 135 mm) in total length (from the tip of the fins to the tip of arms).  Analysis of the sequential photos revealed that the flight behavior of squid can be divided into four stages.

◆ Landing on water: They wrap the fins around the mantle and fold their arms and take up a position slightly downward (pitch down) toward the direction of movement.

As mentioned above, it was revealed that squid display highly sophisticated flight behavior instead of simply jumping out of water.

It is highly likely that the flying of squid occurs frequently as escape behavior in the seas around the world.  It suggests many squid are eaten by sea birds in the air.  This is thought to help understand the food chain of marine ecosystem. 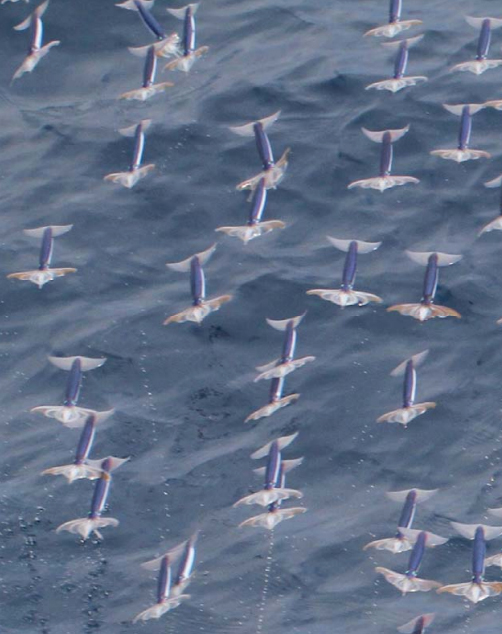 Shoal of squid gliding in the air – they create lift at the front and back of their bodies by spreading their fins, arms and protective membrane.