Cells in the brain’s master circadian clock synchronize voltage rhythms despite asynchronous calcium rhythms, which might explain how a tissue-wide rhythm is maintained.

A network of thousands of neurons forms a tissue called the suprachiasmatic nucleus (SCN) within the brain. The SCN, functioning as the master circadian clock, is responsible for generating daily rhythms in physiology and behaviour including sleep patterns.

The voltage rhythms were found to be synchronized throughout the cultured SCN tissue. The voltage changes were measured using fluorescent sensor proteins for 72 hours.

Neurons in the SCN generate oscillatory signals that are sent out to different parts of the brain and other organs throughout the body. Sending signals involves fluxing calcium ion concentrations inside and outside the nerve cell, and generating a charge difference that then sparks an electrical impulse that is fired down the neuron. The charge difference is measured in volts.

A team of researchers at Hokkaido University and colleagues in Japan successfully measured voltage changes in SCN cells over several days. Previous methods were more indirect to measure the neuronal activities or yielded insufficient spatial information.

The team introduced a gene that encoded “voltage sensors” into cultured SCN slices from newborn mice. The sensors are formed by fusing a fluorescent protein with another protein that can sense voltage. The intensity of the sensor’s fluorescence changes significantly with changes in voltage, which can be detected by a special microscope.

The team was surprised to find that voltage rhythms were synchronized across the entire SCN. “This was unexpected because previous research found neuron groups in various SCN regions express circadian rhythm genes differently,” says Ryosuke Enoki at Hokkaido University

While measuring voltage changes, the researchers simultaneously measured calcium ion concentrations across cell membranes and found they, similar to so-called “clock genes,” were not synchronized across the entire SCN. This finding supports previous research.

The researchers suggest in their study published in the journal Proceedings of the National Academy of Sciences that the SCN could be maintaining a network-wide coherent rhythm through synchronous voltage changes.

“Inter-cellular interactions within the SCN could be in play in synchronizing voltage rhythms separate from asynchronous calcium rhythms. Further research is necessary to elucidate the mechanism and its physiological roles in maintaining the body’s circadian clock,” Enoki commented. 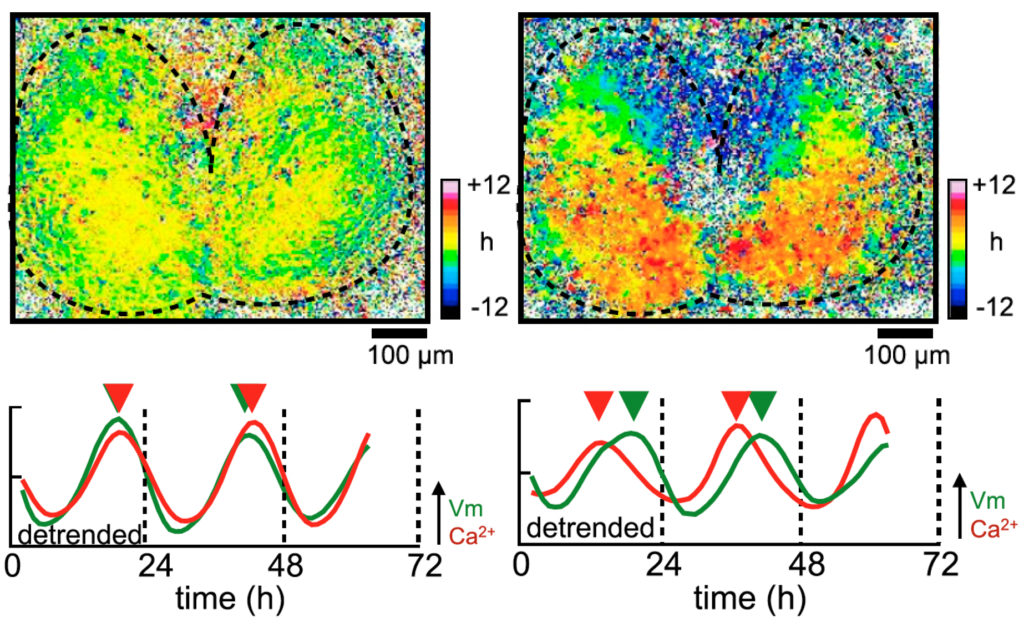 Voltage rhythms (top left) were synchronized throughout the SCN while calcium rhythms (top right) were specific to regions within the tissue. This resulted in a phase difference between voltage and calcium rhythms in the dorsal region (bottom right) while the two rhythms were in phase in the ventral region (bottom left). (Enoki R. et al., Proceedings of the National Academy of Sciences, March 7, 2017)