Tapping the world of polyampholytes to make a self-healing gel

The self-healing gel that was cut and then rejoined maintains its tensile strength. (Ihsan AB et al., Macromolecules, May 23, 2016)

Tao Lin Sun came to Hokkaido University in 2009 to pursue a doctorate degree on soft matter after seeing scientific papers authored by Professor Jian Ping Gong, one of the world’s top scholars in that field. 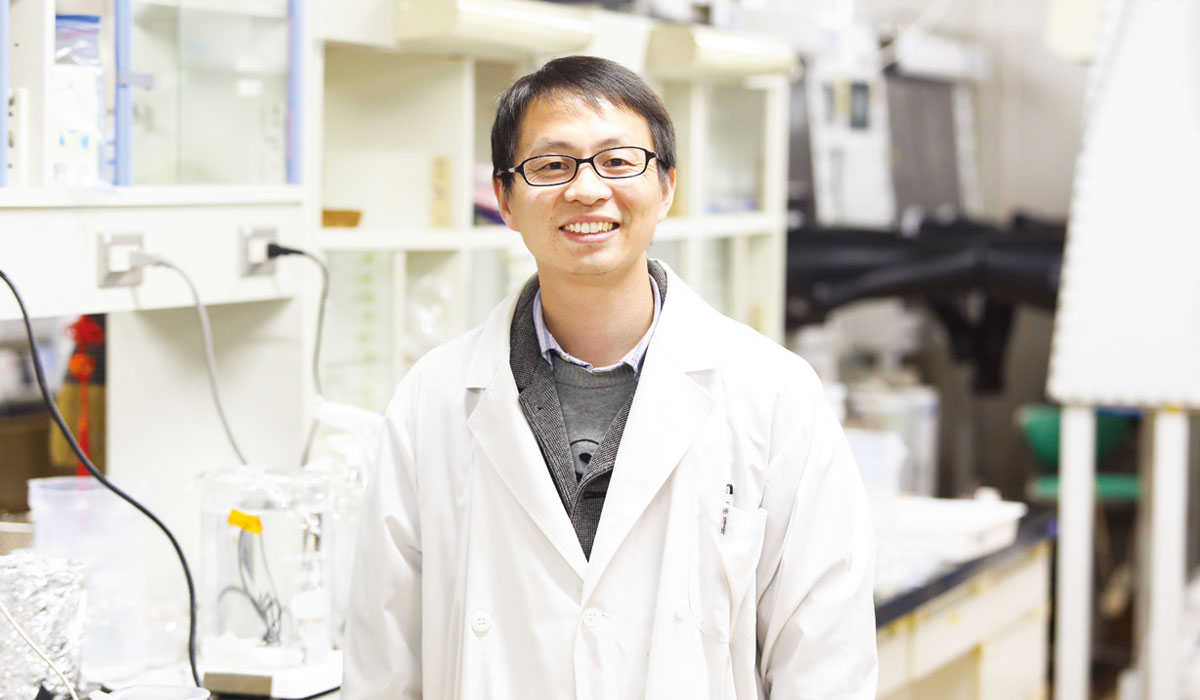 “While I was a graduate student at the University of Science and Technology of China, I focused on soft matter such as rubber-like materials,” said Sun, who was an assistant professor at Hokkaido University until December 2017. “I was so excited about Professor Gong’s work. It really inspired my research.” 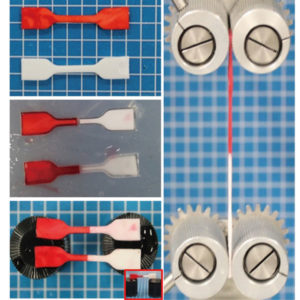 Under Gong’s guidance, Sun initiated a study of self- healing gels, determinedly conducting experiments on roughly 15 different monomers – a chemical compound that can undergo polymerization. One year later, Sun’s endeavors produced a success: He developed a self-healing gel that is very tough, exhibits excellent mechanical properties and endures autonomous healing and repairing after undergoing damage – all properties shared by living tissues.

When the gel is cut into two pieces, the cut surfaces can connect to each other like a healing wound. When the ruptured surfaces come in contact, a large number of damaged ionic bonds near the surfaces re-form across the interface, thus healing the gel.

Macromolecule with both positive and negative charge is vital

The key to Sun’s gel is polyampholytes – macromolecules that have a mixed anion (negatively charged ions) and cation (positively charged ions) character. This class of gel is synthesized simply by copolymerizing a charge-balanced amount of oppositely charged monomers at high concentration so the polymer chains entangle to form gels.

“It was amazing,” Sun recalled, pointing to the fact that most hydrogels do not have autonomous healing or repairing functions. “When I announced the finding at a group meeting, Professor Gong and the other professors were so excited. Nobody, including me, thought polyampholytes could make this kind of gel.”

The polyampholyte chains’ charge distribution is random, leading to the formation of multiple ionic bonds, of both intrachains and interchains.

The strong ionic bonds of interchains, stabilized by entanglements, serve as permanent cross-linking, or a bond that links one polymer to another. Meanwhile, the weak ionic bonds, of both interchains and intrachains, serve as dynamic and reversible sacrificial bonds to dissipate energy. The reversible sacrificial bonds give toughness to the material because the gel can make a self-recovery after a large deformation – thanks to the breaking and re-forming of weak ionic bonds. 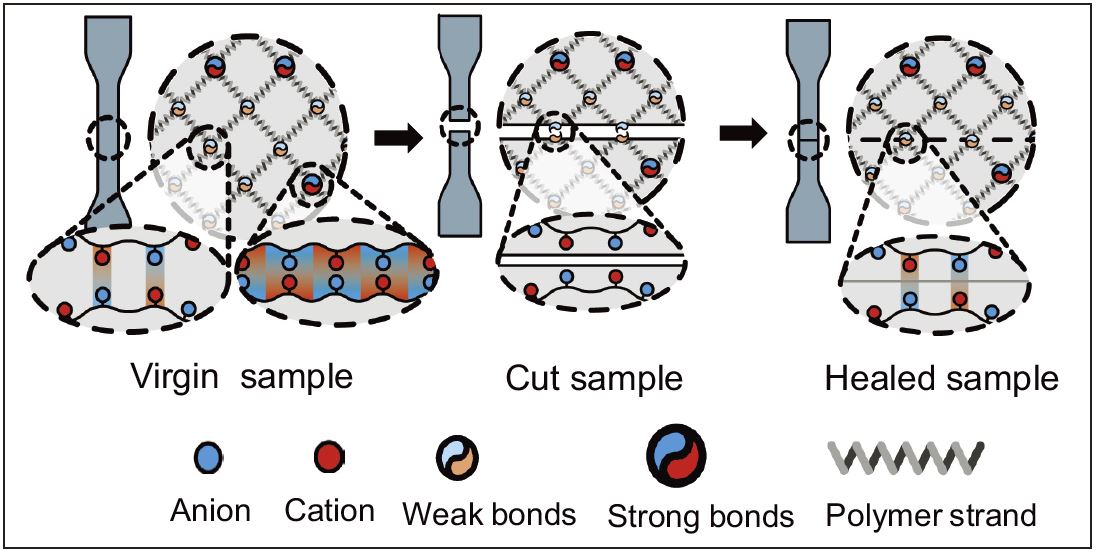 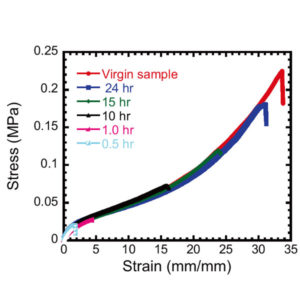 The stress−strain curves showing tensile strength after healing. The virgin sample and healed samples were measured at room temperature. Cut pieces were reconnected immediately after cutting and healed in water for different times at 25°C. (Ihsan AB et al., Macromolecules, May 23, 2016)

Sun said one of his priorities is to make the polyampholyte gel much tougher. This would potentially help biomaterials become widely used in the future.

“I focus on fundamental research so the mechanical behavior of hydrogels can be understood,” Sun said. “I want to understand the internal structure that makes the gel very tough. If we accurately identify this mechanism, we can design much tougher gels for applications such as biomaterials and industrial use, including tires. That is my immediate goal.” Sun’s long-term goal is to make super-tough materials that can be used for artificial bones and teeth.

Sun is convinced that hydrogels will be a material for the next generation. “This kind of gel is very new, and you need knowledge in so many areas, such as chemistry, physics and life science,” Sun said. “The challenge is how to connect the internal structural change with microscopic deformation. If we uncover this connection, we will know how to address problems associated with making hydrogels tougher. We want to construct a mathematical model to describe this connection.”

*Dr. Tao Lin Sun has been conduct- ing his research at South China University of Technology since January 2018. 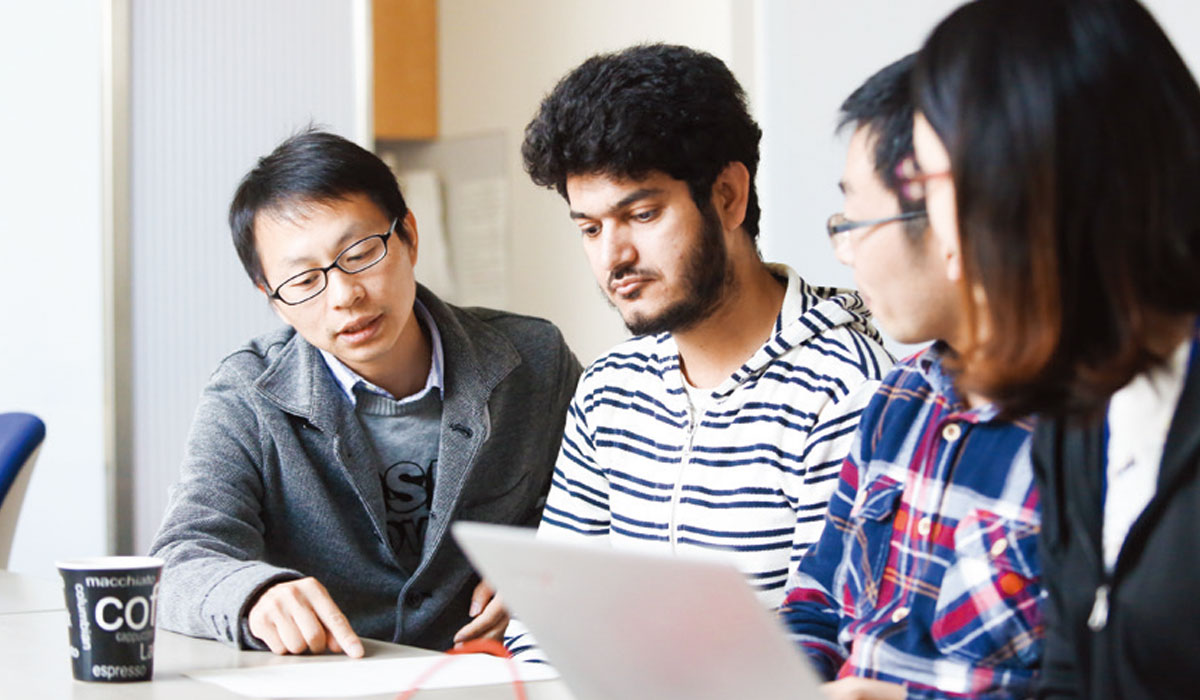