The blast that shook the ionosphere

A 2020 explosion in Lebanon’s port city of Beirut led to a southward-bound, high-velocity atmospheric wave that rivaled ones generated by volcanic eruptions.

The epicenter in Beirut, before and after the explosion (Bhaskar Kundu, et al. Scientific Reports. February 2, 2021).

Just after 6 p.m. local time (15.00 UTC) on August 4, 2020, more than 2,750 tons worth of unsafely stored ammonium nitrate exploded in Lebanon’s port city of Beirut, killing around 200 people, making more than 300,000 temporarily homeless, and leaving a 140-metre-diameter crater in its wake. The blast is considered one of the most powerful non-nuclear, man-made explosions in human history.

Now, calculations by Hokkaido University scientists in Japan have found that the atmospheric wave from the blast led to electron disturbances high in Earth’s upper atmosphere. They published their findings in the journal Scientific Reports.

The team of scientists, which included colleagues from the National Institute of Technology Rourkela in India, calculated changes in total electron content in Earth’s ionosphere: the part of the atmosphere from around 50 to 965 kilometres in altitude. Natural events like extreme ultraviolet radiation and geomagnetic storms, and man-made activities like nuclear tests, can cause disturbances to the ionosphere’s electron content.

“We found that the blast generated a wave that travelled in the ionosphere in a southwards direction at a velocity of around 0.8 kilometres per second,” says Hokkaido University Earth and Planetary scientist Kosuke Heki. This is similar to the speed of sound waves travelling through the ionosphere.

The team calculated changes in ionospheric electron content by looking at differences in delays experienced by microwave signals transmitted by GPS satellites to their ground stations. Changes in electron content affect these signals as they pass through the ionosphere and must be regularly taken into consideration to accurately measure GPS positions. 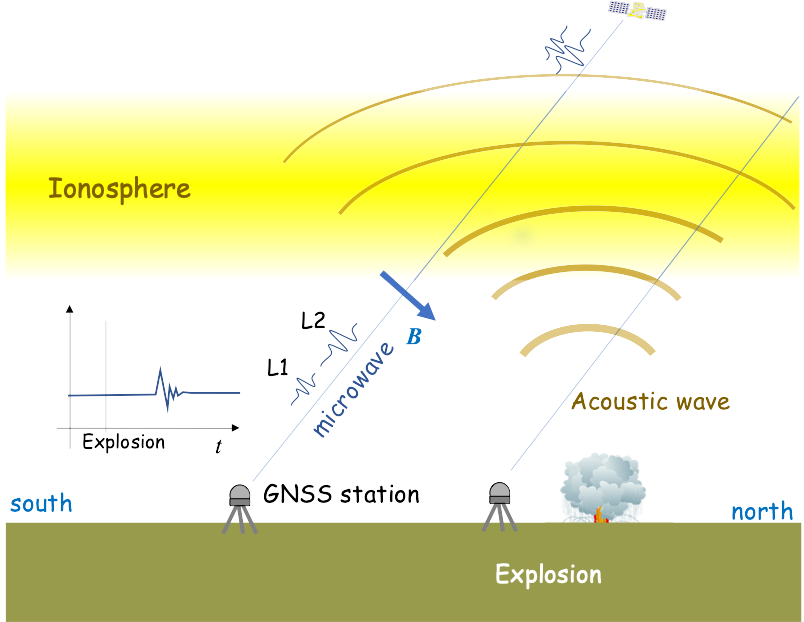 This work was supported by a National Institute of Technology Rourkela (NITR) research fellowship and the Japan Society for the Promotion of Science (JSPS) KAKENHI (JP20K04120).

Department of Earth and Planetary Science