The Symposium “Dialogue with Foreign Minister Fumio Kishida: Conveying Hokkaido’s Appeal from the Grassroots to the World” took place at Hokkaido University

A symposium co-hosted by the Ministry of Foreign Affairs and Hokkaido University was held at the university’s Conference Hall on Sunday, April 23rd, 2017. The theme of the symposium was “Dialogue with Foreign Minister Fumio Kishida: Conveying Hokkaido’s Appeal from the Grassroots to the World.” It was conducted as a part of the “Local to Global” Project which was recently established as a way to take up the issue of how to showcase the beauty of regional areas to the world.

Parliamentary Vice-Minister for Foreign Affairs Shunsuke Takei and Toyoharu Nawa, President of Hokkaido University, gave the opening addresses at the symposium. This was followed by the keynote address given by Foreign Minister Kishida on initiatives to disseminate the intrinsic attractiveness of Hokkaido to the world. There was also a panel discussion with Harumi Takahashi, Governor of Hokkaido Prefecture, Takashi Nishiyama, Representative of Nishiyama Seimen Co., Ltd., and Genki Kubo, Director of the Technology Development Department at Nitto Construction, Inc. 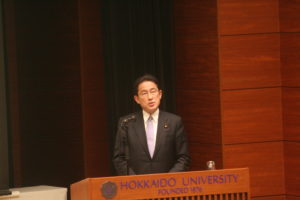 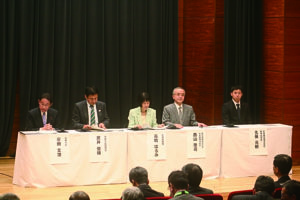 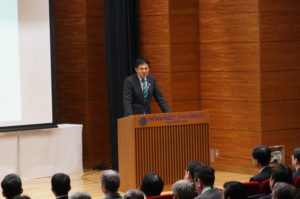 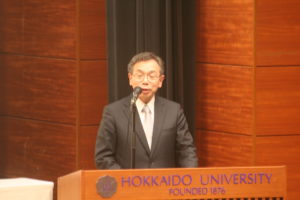 Following the symposium, four international students and a Japanese student from the university engaged in a colloquium with Foreign Minister Kishida which was chaired by Parliamentary Secretary Takei. President Nawa watched over the discussion as the group, composed of people from overseas or have experience travelling abroad, actively shared their opinions and ideas on how to bring in more tourists to Hokkaido. 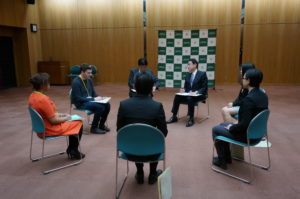 Foreign Minister Kishida and the students exchanging their opinions 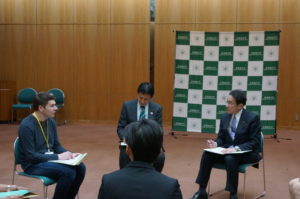 Foreign Minister Kishida listening to the opinions given by the students 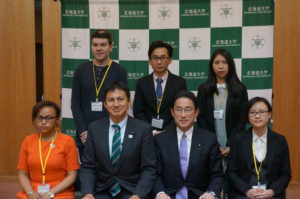 Commemorative photo of those who participated in the colloquium

Before the symposium, President Nawa and Foreign Minister Kishida engaged in friendly conversation. A positive atmosphere filled the day, as they spent it discussing how to relay the charm of Hokkaido. 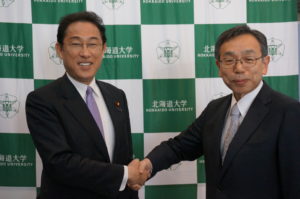