Scientists have employed a new method utilizing tsunami signals to calculate the calving magnitude of an ocean-terminating glacier in northwestern Greenland, uncovering correlations between calving flux and environmental factors such as air temperature, ice speed, and ocean tides.

The calving front of Bowdoin Glacier in northwestern Greenland, where icebergs are discharged and ice under the water melts. Photo taken by Shin Sugiyama in 2015.

In recent years, glaciers near the North and South poles, as well as in mountainous areas, have been shrinking due to the effect of global warming, becoming a significant contributor to the recent sea level rise. Calving glaciers, which discharge icebergs into an ocean or lake, have retreated more rapidly than those on land because of sections collapsing at the glacier front and due to submarine melting.

It is, however, difficult to directly measure the volume of calving ice and submarine melting because conducting on-site examinations at the glacier front can be dangerous. Conventional methods that measure their volume based on satellite image analysis also yield only low temporal and spatial resolutions and do not allow continuous monitoring.

When icebergs break off into water, the so-called impulse waves or simply, tsunami waves, move over the ocean or lake. In this study, the team including Evgeny Podolskiy and Shin Sugiyama of Hokkaido University and Masahiro Minowa of the Austral University of Chile measured the volume of icebergs that broke off from Bowdoin Glacier, a calving glacier terminating at the head of Bowdoin Fjord. An underwater pressure sensor capable of making 20 measurements per second was placed in front of the glacier to record calving-generated tsunami waves measuring 10 centimeters to 1 meter high. The researchers then compared the data with high-resolution images of the glacier front taken by unmanned aerial vehicles (UAVs) as well as images by a time-lapse camera to find the relationship between calving events and tsunami-wave properties.

The team found a positive correlation between the volume of calving ice and wave amplitude, and confirmed that the distance to calving events can be measured with a single pressure sensor from a frequency dispersion of water waves. Based on their measurements, they estimated the temporal and spatial distribution of icebergs that broke off within the study period from Bowdoin Glacier. The estimated volume of calving ice was also compared with the speed the glacier was flowing, the tides, and fluctuations in air temperature.

The team found that the calving volume was higher at places where meltwater rises from the bottom of the glacier to the sea surface. The calving volume, or rate, was greater during periods of fast ice flow, high air temperature, and at falling/low tide. A satellite image analysis showed calving events caused only 20 percent of the mass loss at the glacier front, suggesting 80 percent of the ice mass loss was caused by submarine melting.

“Our study, which utilized tsunami signals to measure the calving flux, will help us understand the interplay between glaciers and oceans, a key factor in predicting future evolutions of glaciers,” says Evgeny Podolskiy.

The study was led by Masahiro Minowa and was conducted in collaboration with Austral University of Chile, ETH Zurich and the University of Florence. 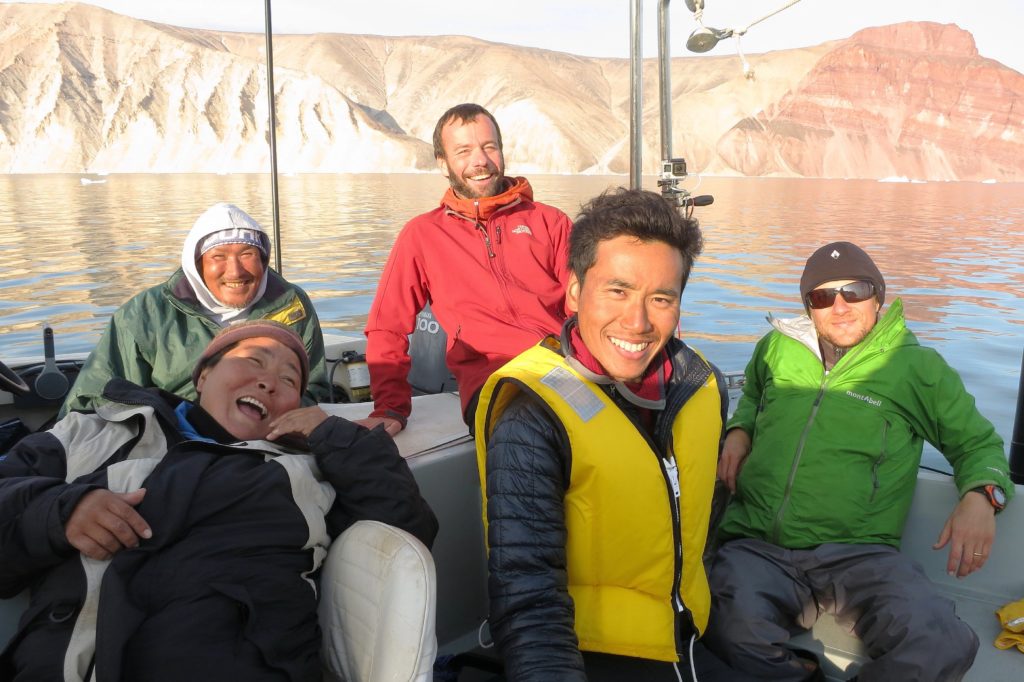 This study was a part of the GRENE Arctic Climate Change Research Project and partially carried out in the Arctic Challenge for Sustainability (ArCS) project, and was supported by a Grant-in-Aid for JSPS Research Fellow (JP16J01860) and the ArCS fellowship for Japanese early carrier scientists and graduate students.