Underwater seismometer can hear how fast a glacier moves

Scientists show that an ocean-bottom seismometer deployed close to the calving front of a glacier in Greenland can detect continuous seismic radiation from a glacier sliding, reminiscent of a slow earthquake. 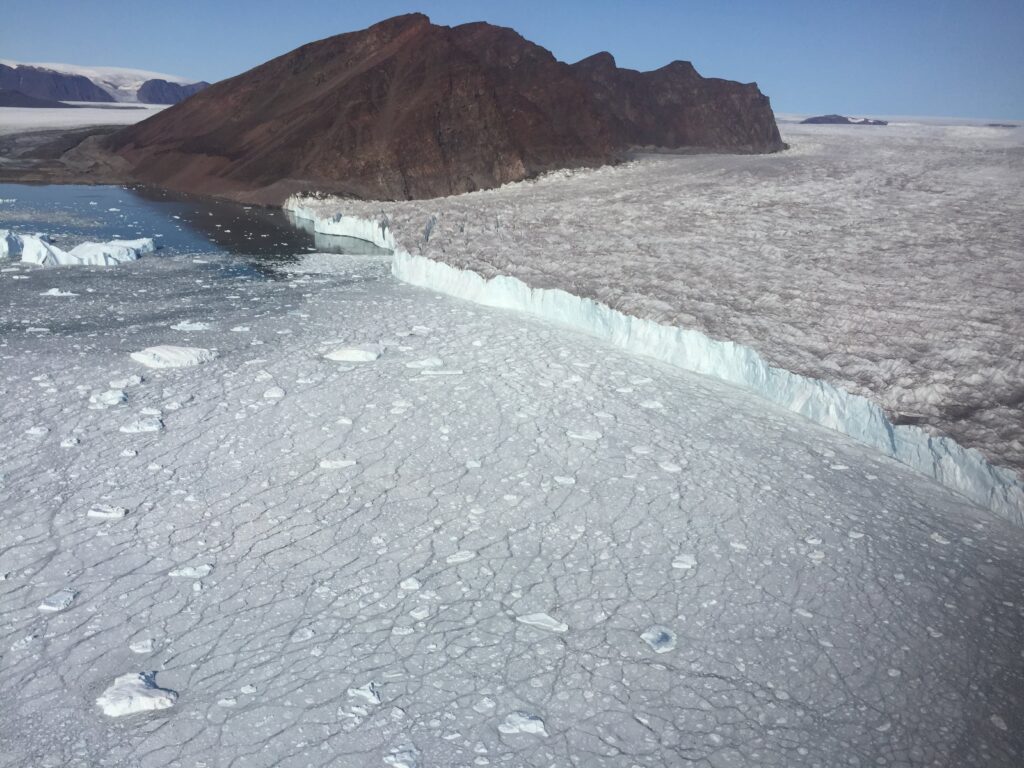 The calving front of Bowdoin Glacier (Photo: Evgeny A. Podolskiy).

Basal slip of marine-terminating glaciers controls how fast they discharge ice into the ocean. However, to directly observe such basal motion and determine what controls it is challenging: the calving-front environment is one of the most difficult-to-access environments and seismically noisy — especially on the glacier surface — due to heavily crevassed ice and harsh weather conditions.

A team of scientists from Hokkaido University, led by Assistant Professor Evgeny A. Podolskiy from the Arctic Research Center, have used ocean-bottom and surface seismometers to detect previously unknown persistent coastal shaking generated by a sliding of a glacier. Their findings were published in the journal Nature Communications.

Sensors to measure glacial motion can potentially be placed on top of, within, or below the glacier; however, each approach has its own drawbacks. For example, the surface of glaciers is ‘noisy’ due to wind and tide-modulated crevassing, which can overwhelm all other signals; while the interior is quieter, it is the hardest area to access. However, all of these locations are plagued by common issues such as station drift, melt out and level loss, cold temperatures, and potential instrument destruction by iceberg calving.

In the current study, the scientists used an ocean-bottom seismometer (OBS) that was deployed near the calving front of Bowdoin Glacier (Kangerluarsuup Sermia) to listen to icequakes caused by glacial basal motion. By doing so, they insulated the sensor from the near-surface seismic noise, and also circumvented all the issues that accompany the deployment of sensors on the glacier itself and nearby. The data they collected from the OBS was correlated with data from seismic and ice-speed measurements at the ice surface. 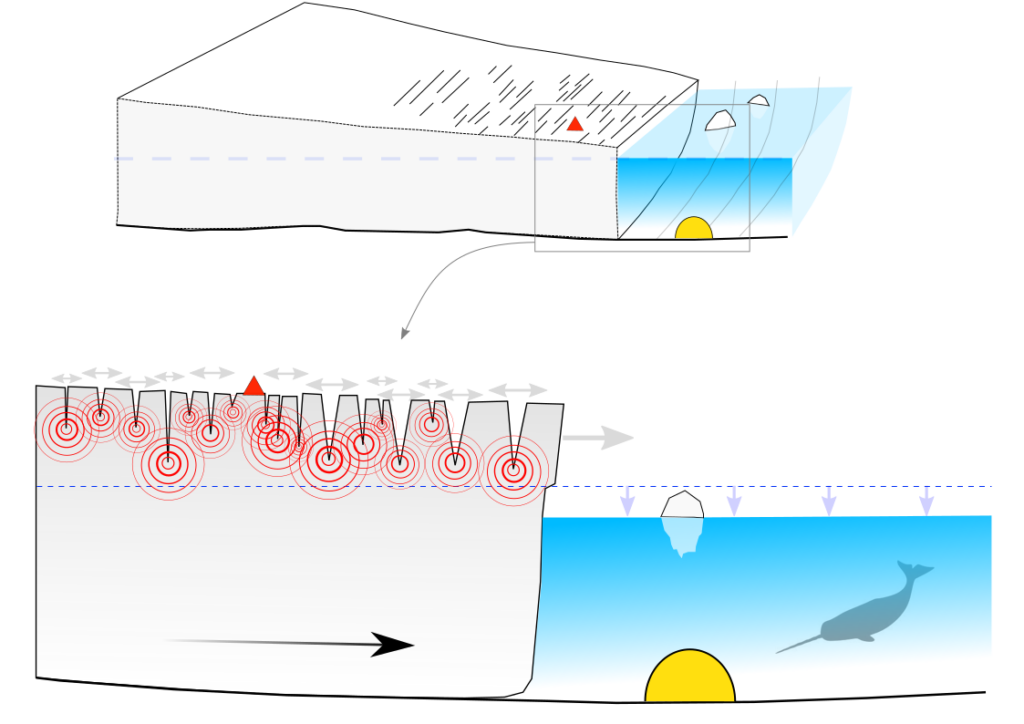 Key advantages of deploying an ocean-bottom seismometer near the calving front of a tidewater glacier. Subglacial and ocean seismo-acoustic signals can be detected, while the impact of surface seismic sources is minimised (Evgeny A. Podolskiy, Yoshio Murai, Naoya Kanna, Shin Sugiyama. Nature Communications. June 24, 2021).

The analysis of the data revealed that there is a continuous seismic tremor generated by the glacier. In particular, the broad-band seismic signal (3.5 Hz to 14.0 Hz) detected by the OBS correlated well with the movement of the glacier. The scientists were able to identify signals that were not associated with glacial basal dynamics. Data from the OBS were necessary to establish a correlation between tremors detected by the surface stations and GPS-recorded displacement of the glacier. In the process, they demonstrated that continuous seismic data that was historically considered ‘noise’ contains signals that can be used to study glacier dynamics.

The scientists also suggested that glacier slip is similar to slow earthquakes. The characteristics of the Bowdoin-Glacier tremor remind those of tectonic tremors in Japan and Canada. Moreover, the presence of the tremor is in line with recent theoretical models and cold-laboratory experiments. 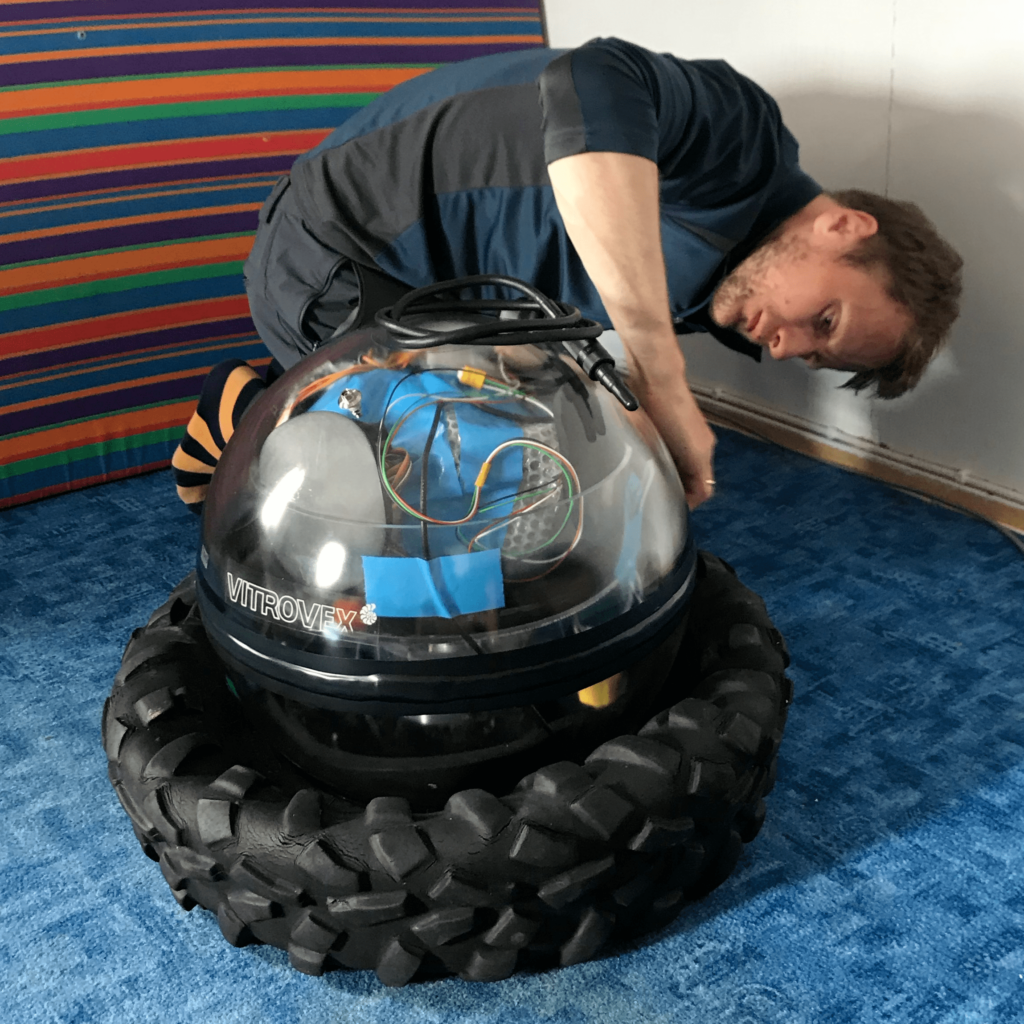 Evgeny A. Podolskiy, lead author of the study, assembling the ocean-bottom seismometer in Qaanaaq, northwest Greenland, July 2019 (Photo: I. Asaji).

The scientists have presented a novel method to collect continuous glacioseismic information about glacier motion in an extremely noisy and harsh polar environment using ocean-bottom seismology. “Future research in this area could focus on replicating and expanding upon the findings of this study at other glaciers,” says Evgeny A. Podolskiy. “The experimental support for the relationship between glacier tremors and tectonic tremors suggests that a long-term multidisciplinary approach would be beneficial in fully understanding this phenomenon.” 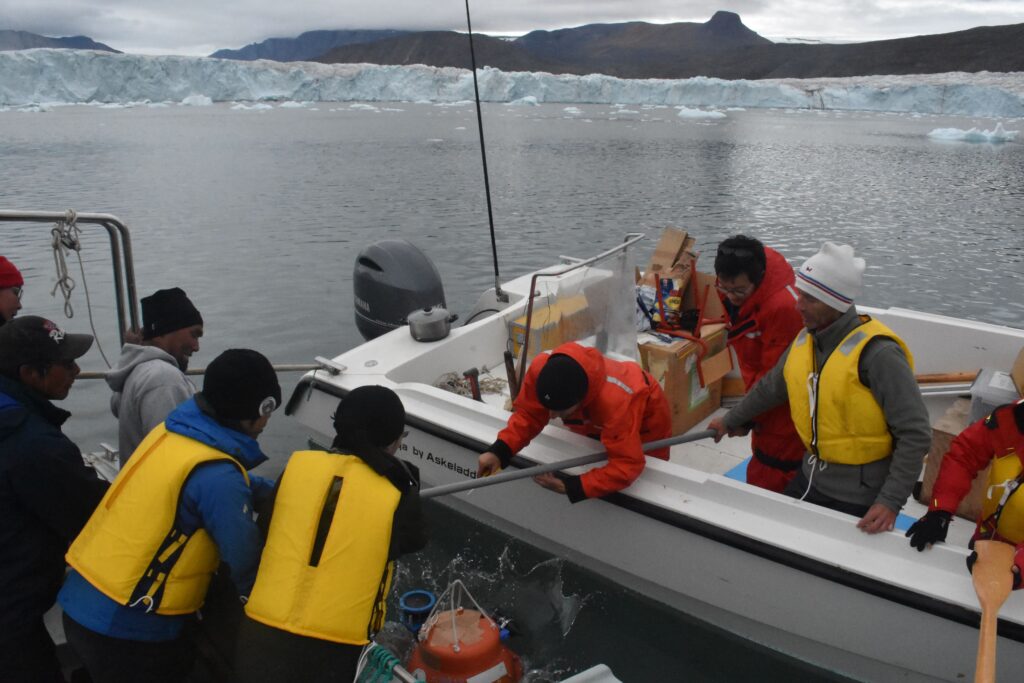 The ocean-bottom seismometer being deployed by the authors and colleagues, 21 July 2019, Bowdoin Fjord (Photo: I. Asaji).

This work was supported by the Arctic Challenge for Sustainability research projects (ArCS, JPMXD1300000000; and ArCS-II, JPMXD1420318865) funded by the Ministry of Education, Culture, Sports, Science and Technology of Japan (MEXT); J-ARC Net; Grants-in-Aid for Scientific Research “KAKENHI” (18K18175) from the Japan Society for the Promotion of Science (JSPS);  and the Second Earthquake and Volcano Hazards Observation and Research Programme (Earthquake and Volcano Hazard Reduction Research funded by MEXT).