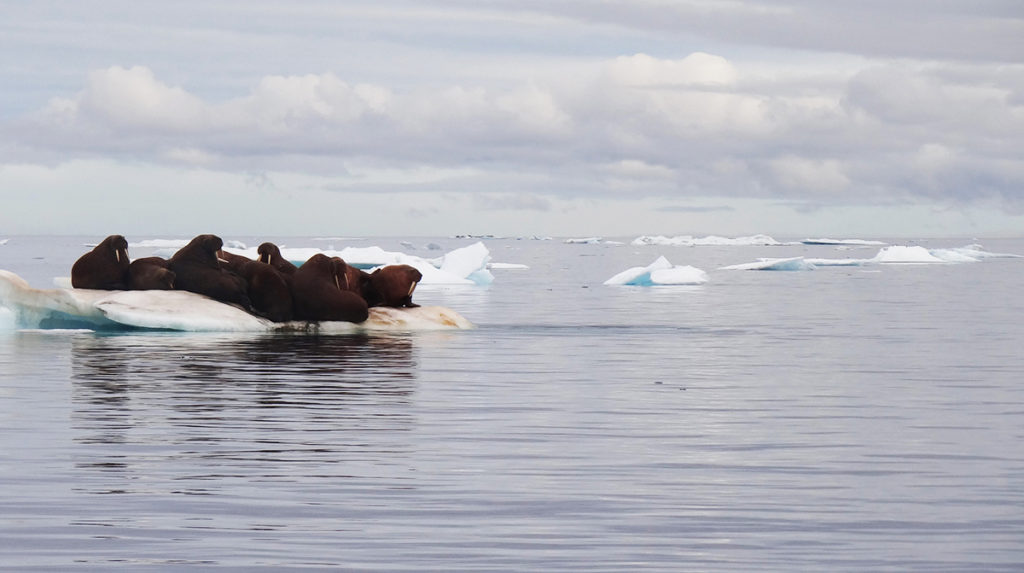 Walruses huddling together on a block of ice in the Arctic Ocean in August 2012 right before the summer ice cover hit a record low in the following month. Photo taken by Toru Takatsuka, Institute of Low Temperature Science, Hokkaido University.

Ice-covered sea areas in the Arctic Ocean during summer have nearly halved since the 1970s and 1980s, raising alarm that the ocean is shifting from a multiyear to a seasonal ice zone. The Intergovernmental Panel on Climate Change (IPCC) has forecasted summer ice cover in the polar ocean might disappear almost completely as early as 2050. Various factors have been cited as causes, including rising temperatures and changes in atmospheric circulation patterns.

Sea ice concentrations in September. The left and right maps show the average ice concentration in the Arctic Ocean in the 1980s and 2010s respectively. The fan-shaped outline marks the study area. The maps are based on information provided by the National Snow and Ice Data Center.

Recently, however, ice-ocean “albedo feedback” has emerged as a key cause for sea ice melt. The feedback is generated by a large difference in albedo – a measure of light reflectivity – between open water and ice surfaces. As dark ocean surfaces absorb more light than white ice surfaces, solar heat input through the open water melts sea ice, increasing both open water areas and heat input and thus accelerating sea ice melt.

To examine this theory, a team of researchers including Hokkaido University Professor Kay I. Ohshima and Haruhiko Kashiwase of the National Institute of Polar Research, conducted a quantitative analysis of key factors such as solar energy input, ice melt volume and ice divergence of a sea area that has shown major ice melt.

Analyzing the data from 1979 to 2014, the researchers found the solar heat input through open water surfaces correlated well with ice melt volume, suggesting heat input is a major causative factor of melting ice. This was particularly obvious after 2000, when there were considerable reductions in sea ice.

Accumulated heat input through open water surfaces in the surveyed area from May to August (red line) correlated well with interannual variations in ice melt volume (black line) between 1979 and 2014. Sea ice melt volume is converted to the heat input required for ice melt.

Their data also revealed that sea ice divergence, which reflects the amount of sea ice spreading outward making more water surfaces, in the early melt season (May-June) triggers large-scale feedback, which subsequently amplifies ice melting in the summer. The volume of ice divergence has doubled since 2000 due to a more mobile ice cover as multiyear ice has declined, which can explain the drastic ice reduction in the Arctic Ocean in recent years.

“This study was the first to quantitatively elucidate that ice-ocean albedo feedback is a primary driver of seasonal and yearly variations in Arctic sea ice retreat,” says Kay I. Ohshima. “The study pointed to the possibility of forecasting the largest sea ice retreat in a given year based on the magnitude of ice divergence in May and June. Furthermore, unraveling the causes of sea ice retreat should help us understand the mechanisms behind climate change on a global level, which is interrelated to the ice reduction in the Arctic ocean.” 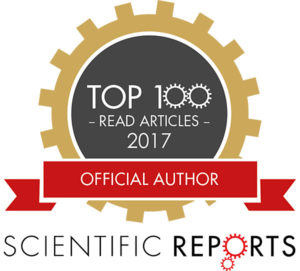 This paper is named as one of the Top 100 most read Earth sciences papers for Scientific Reports in 2017.

This work was supported by the Green Network of Excellence (GRENE) Arctic Climate Change Research Project of the Ministry of Education, Culture, Sports, Science and Technology in Japan.