Unraveling the Genes for Sexual Traits in Stag Beetles

Scientists have built a gene expression database of a stag beetle and identified genes important for sex determination and differentiation.

Peacocks’ tails, deer antlers and lions manes are all examples of elaborate sex-specific morphological traits in animals.  And like a knight wielding twin spears, males of the golden metallic stag beetle, Cyclommatus metallifer, grow mandibles that are much longer than those of females. Scientists often study how animals use such traits in mating, but know much less about their underlying genetic mechanisms.

Now, scientists from Japan and the U.S. have identified sex determination genes in golden metallic stag beetles for the first time and analyzed their roles in developing sex-specific morphology. 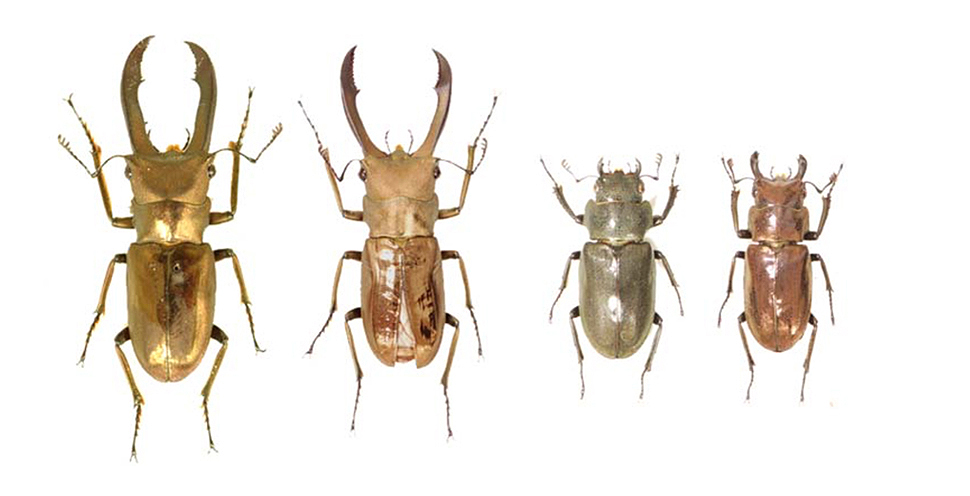 Instead of analyzing genes one by one, the scientists conducted a comprehensive analysis to build the first “transcriptome” library of stag beetles in their larval and prepupal stages. A transcriptome is a database of messenger RNA molecules found in the cells and shows which genes are expressed, or switched on.  As the result, they identified over 10,000 genes which comprised 50-70 percent of the speculated total gene number of this species.

The scientists then searched this transcriptome for sex determination genes also found in the well-studied Drosophila fly. They found 14 candidate genes and then switched off some of these genes—Sex-lethal, transformer-2 and intersex—to test how they affect stag beetle sex-specific morphology.

Switching off Sex-lethal did not affect beetle morphology. However, deactivating transformer-2 killed the beetle pupa, which suggests the gene affects more than sex-specific traits in beetles, if any. The intersex gene played important roles in determining female specific traits in the stag beetle, as in Drosophila. Females with deactivated intersex developed male-like features such as long mandibles and a golden metallic color.

“Our results of functional analyses were consistent with the sex-determination mechanism in sexually monomorphic flour beetle. So, our study demonstrates that even insect with exaggerated sexual character (e.g. mandible of stag beetle) share the same sex-determination cascade with sexually monomorphic beetles” says the first author of the paper, Hiroki Gotoh. This study lays the groundwork for studying the genetic basis of sex-specific traits in insects, not only stag beetles.