Commemorative Photo taken with participants after the roundtable discussion for rectors. Vice President Kasahara is second from the left in the front row.

Hokkaido University Executive and Vice President Masanori Kasahara attended the UArctic Congress 2018 from September 3rd to 4th in Oulu, Finland. The congress brings together key UArctic meetings between its council, rectors, and Thematic Networks and features advanced keynote presentations and an academic conference containing nearly 50 parallel sessions into one single gathering. This year, the Congress was held from September 3rd to 7th at the University of Oulu and the University of Helsinki, both of which are our partner institutions. 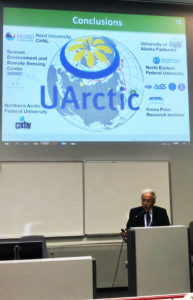 Vice President Kasahara presenting during the round table discussions for rectors.

During the Opening Ceremony held on September 4th, the Plenary Panel discussion “Arctic Agenda 2030 — a Challenge?” was held followed by the opening remarks made by the Prime Minister of Finland Juha Sipilä and Prince Albert II of Monaco.

On September 5th, Vice President Kasahara visited the Hokkaido University Europe Office in Helsinki, located within the University of Helsinki, and received a report on the office’s current and future plans from Helsinki Office Deputy Director Takehiro Okabe.

UArctic is comprised of the University of the Arctic and a cooperative network of universities, colleges, research institutes and other organizations concerned about education and research related to the Arctic. The member organizations are mainly from Canada, Denmark, Finland, Iceland, Norway, Russia, Sweden, and the United States. Since 2011, Hokkaido University has been the only Japanese and non-Arctic region member.