Why do brown bears frequent towns more than before? 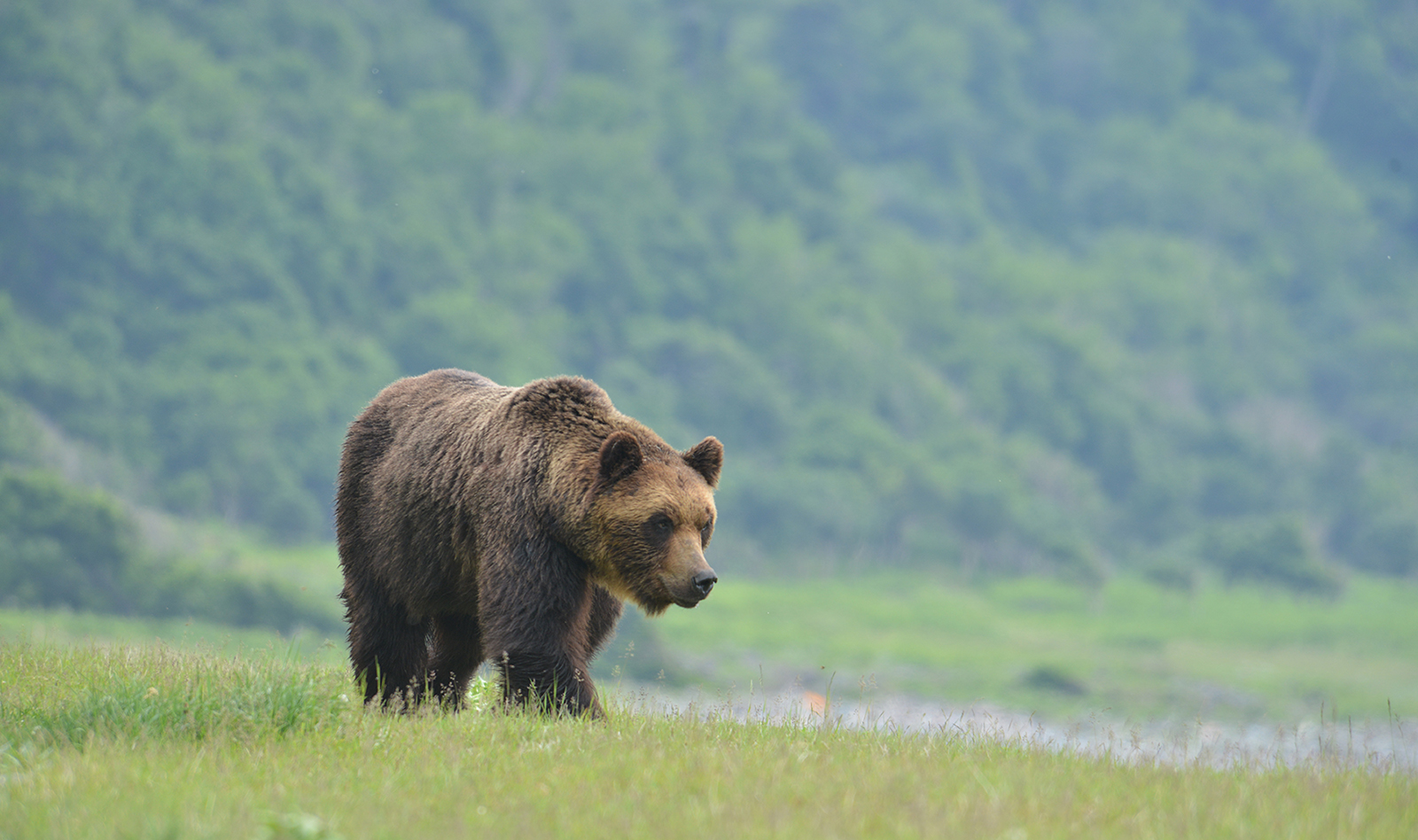 A male brown bear observed in the Rusha area on the Shiretoko Peninsula, Hokkaido, in 2018. Photo taken by Yuri Shirane

“There has been an increasing number of brown bears witnessed in towns, creating conflicts with humans,” says Associate Professor Michito Shimozuru of Hokkaido University’s Faculty of Veterinary Medicine. In fact, surveys have revealed an upward trend in the number of brown bears over the past three decades in Hokkaido, Japan’s northernmost island. Shimozuru and other researchers at the university have been investigating the causes and implications of the increase, reporting some interesting findings.

Shimozuru and his colleagues make frequent visits to Shiretoko, a peninsula jutting into the Sea of Okhotsk at the eastern end of Hokkaido. The area was designated Shiretoko National Park in 1964 and has since been a preserve for wildlife and natural environment. Since 2005, it has also been a UNESCO World Heritage Site. “Shiretoko has one of the highest densities of brown bears in the world and is one of the few places where we can observe them directly and safely. We have collected data for more than a decade,” says Shimozuru. 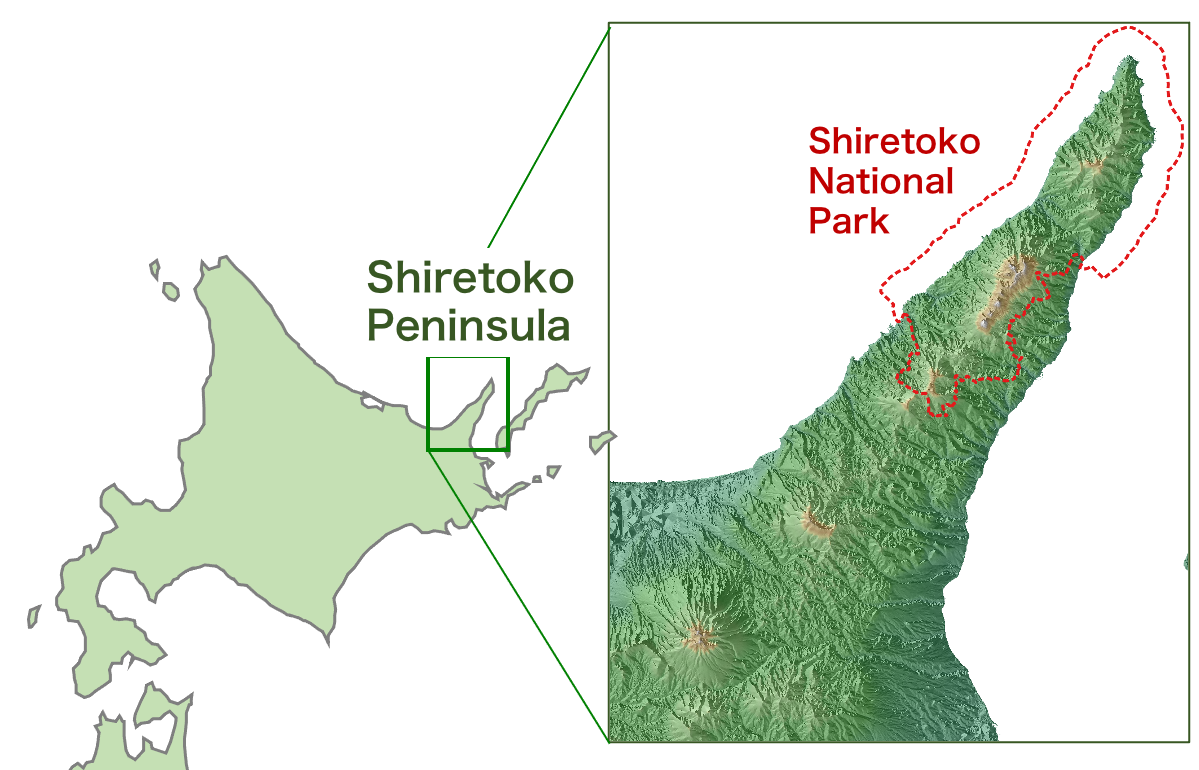 Shiretoko, located at the eastern end of Hokkaido, has one of the world’s highest densities of brown bears.

In Shiretoko, the team has been analyzing brown bears’ diets from their feces as well as their body conditions. They have found that the bears rely on different food resources in different seasons — grass plants in spring and early summer; ants and Japanese stone pine nuts in late summer; and salmons and acorns in autumn; and they hibernate in winter. “We noticed that there was a major decrease in the consumption of pine nuts and salmon in 2012 and 2015. Those are the years in which brown bears were witnessed far more frequently, and we observed extremely skinny bears. We speculate that brown bears come down to lower altitudes and eventually to town due to starvation when both pine nut and salmon supplies are insufficient,” explains Shimozuru. The same thing can happen in other regions where alpine vegetation or marine supply is affected by the climate change, according to the researchers. 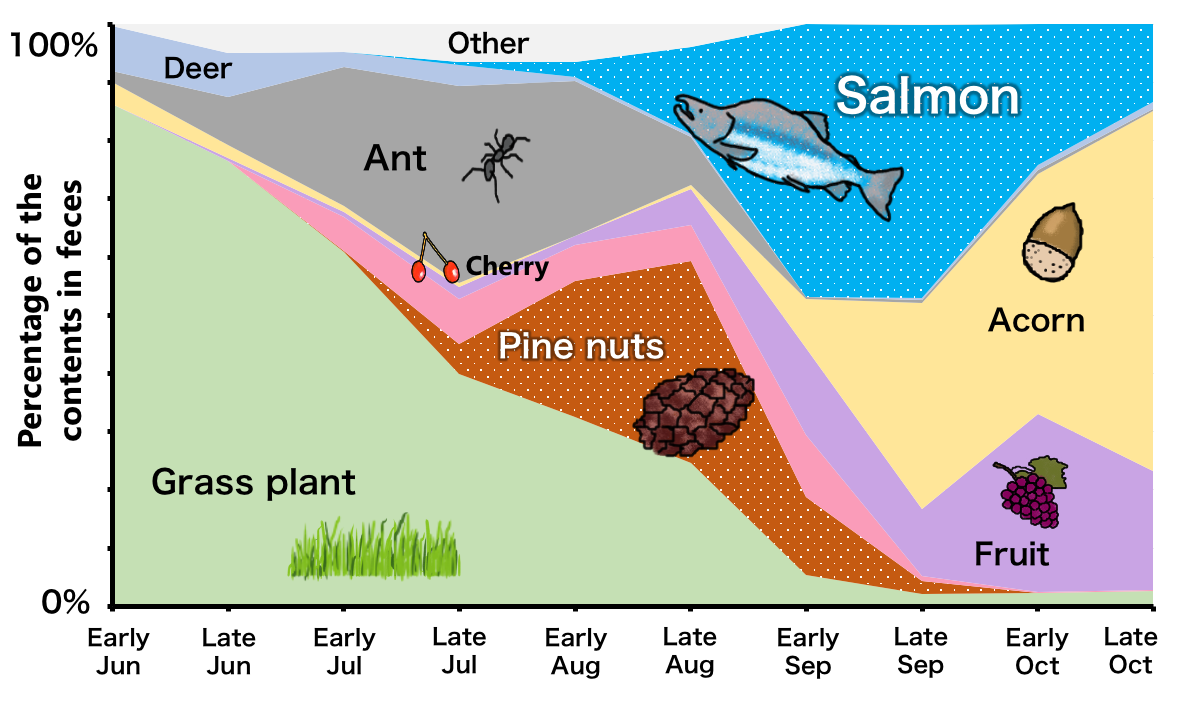 The seasonal dietary shifts revealed by feces analyses of brown bears in Shiretoko.

It is not only scientists who investigate bear ecology. Hokkaido University Brown Bear Research Group is a student group that conducts surveys in the university’s Teshio Experimental Research Forest and Daisetsu Mountains in Hokkaido. Taiki Ito of the group, who studies at the Graduate School of Humanities and Human Sciences, says, “We have been running bear research for over fifty years and have produced several bear researchers.” They regularly hike the prescribed routes in the forest and mountains, carrying out trace surveys, behavior records, and food resource surveys. “Our decades-long surveys have brought about some important findings,” Ito proudly explains.

Rusha area in the Shiretoko National Park (left) and a brown bear observed in the area (right). Photo taken by Masami Yamanaka

The group’s results have been compiled into a paper by Kanji Tomita, a Ph.D. student at the Graduate School of Environmental Science, and his collaborators. “Hokkaido had a policy to exterminate brown bears, until it was abolished for animal conservation reasons in 1990. Looking back at the records of our field surveys from the past forty years, we examined the relationship between the extermination policy and long-term population trend of brown bears,” explains Tomita. “As a result, we found that the relative population densities, which were estimated from observed footprints and scats, have been recovering since 1990, showing a V-shaped curve. The immediate recovery is probably due to high connectivity with the adjacent forests that harbor a large bear population.”

Independently of the student group, Tomita and one of his collaborators have made another interesting discovery: brown bears eat cicada nymphs. They speculate that the brown bears in a planted larch forest have altered their dietary behaviors to adapt to the environment, specifically, to the decreased amount of herbaceous plants. “This sort of novel interaction in an ecosystem can occur in other forests where vegetation is changing,” Tomita claims. 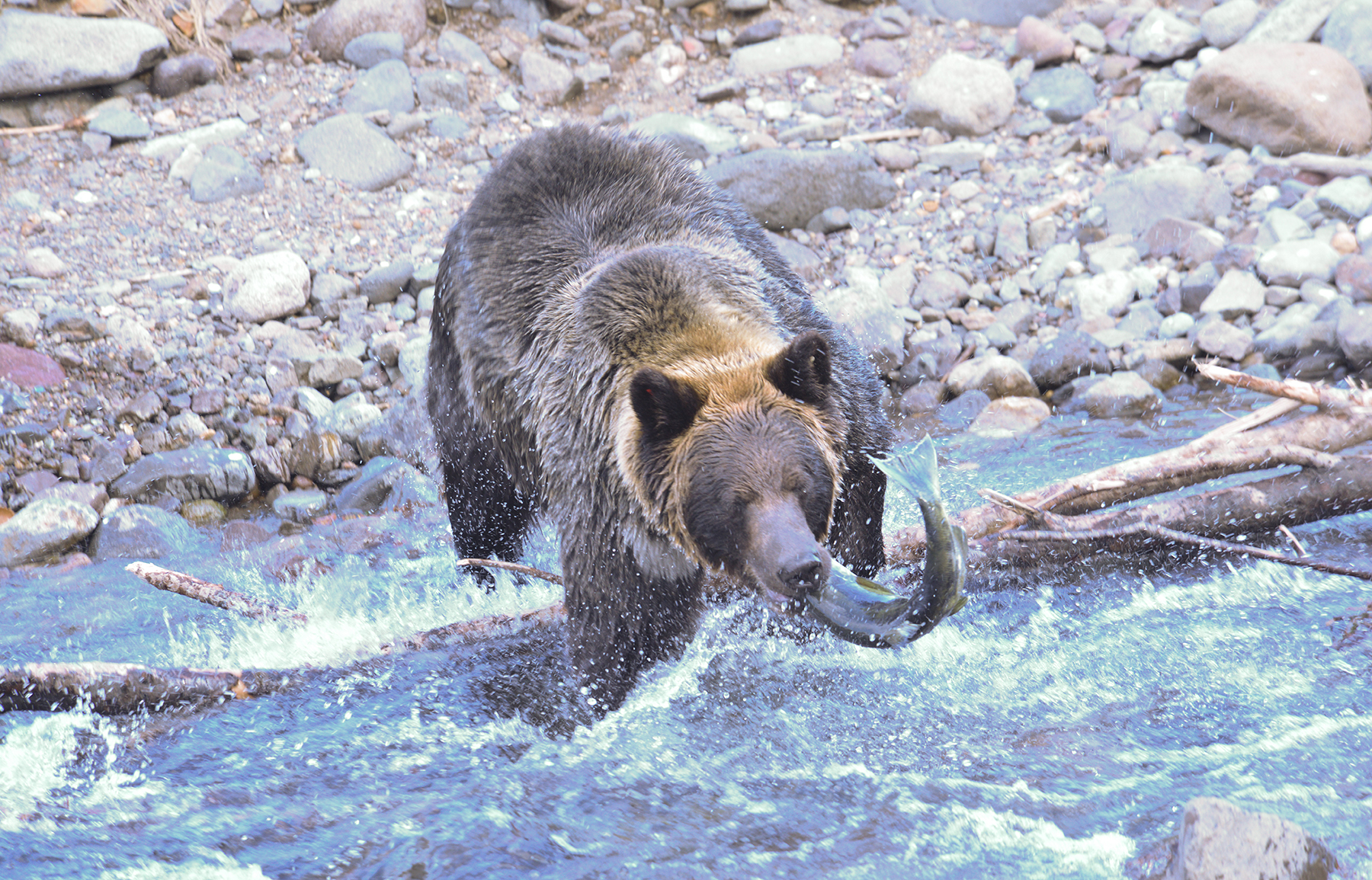 A bear catching a salmon at a river in the Rusha area. Photo taken by Masanao Nakanishi

All those findings suggest the interconnected relationship between brown bear behaviors, food resources, forest vegetation, and climate change. “Brown bears appear in town most frequently in summer and autumn, when they need more food for their growth or to prepare for hibernation but have trouble finding sufficient food in forests,” says Professor Toshio Tsubota at the Faculty of Veterinary Medicine. “The number of brown bears in Hokkaido will likely continue to increase, creating more conflicts with humans. “The local governments should thoroughly update their management plans to hire more wildlife managers and experts, raise public awareness, and mitigate the conflicts between humans and bears,” urged Tsubota. 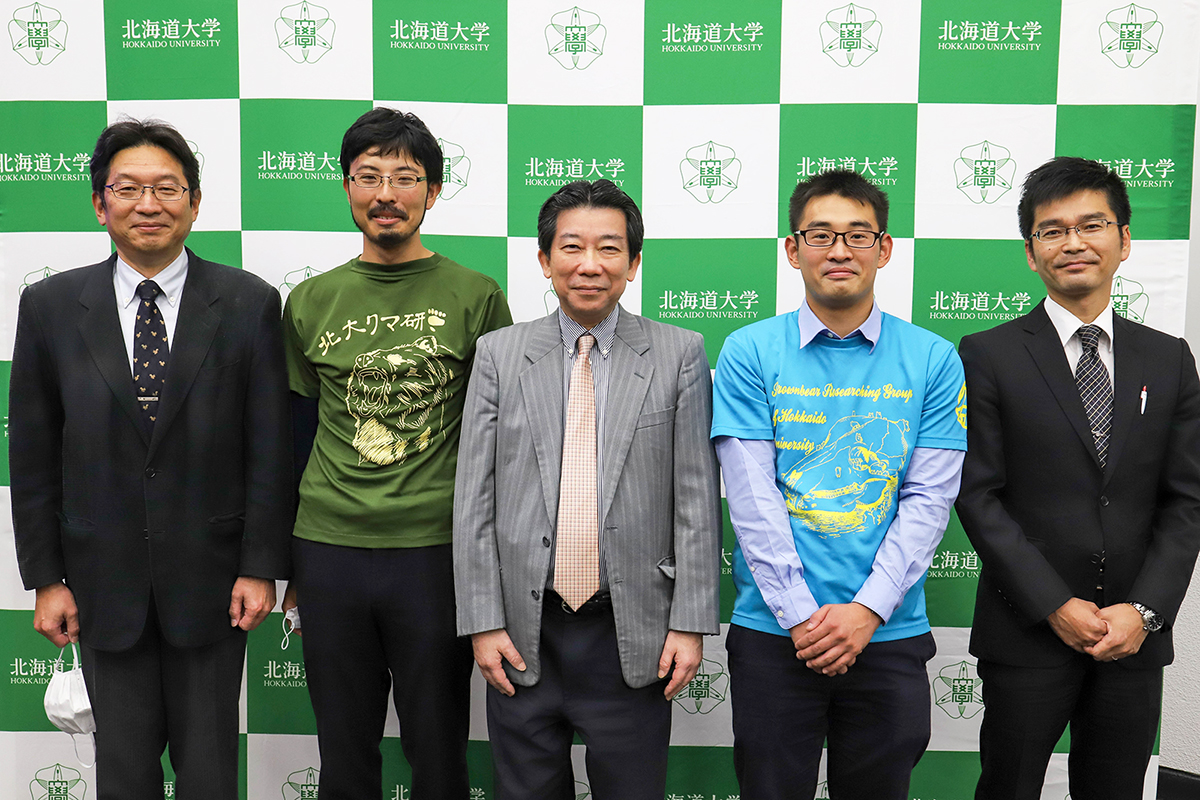