A team of Hokkaido University researchers has developed the world’s first method to achieve the catalytic asymmetric borylation of ketones, a breakthrough expected to facilitate the development of new medicines and functional chemicals. 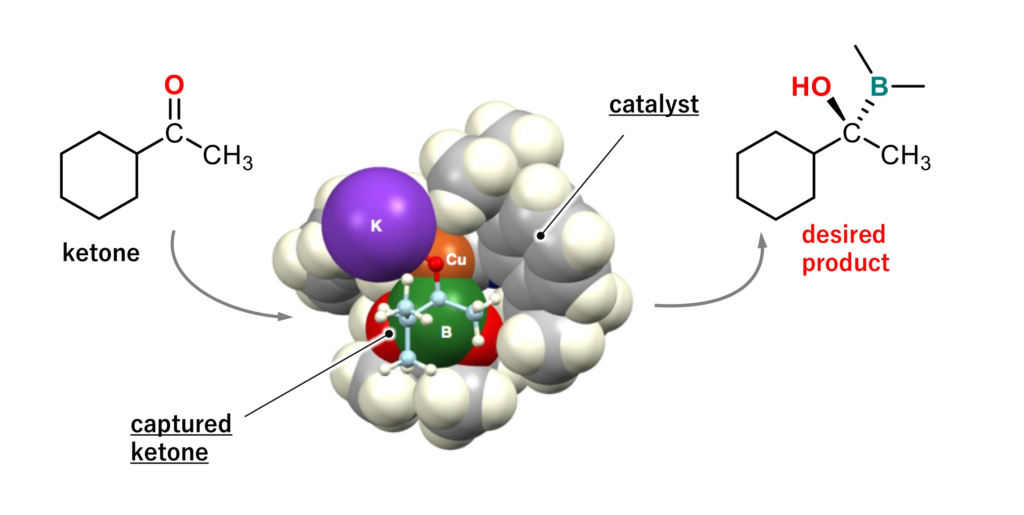 Optically active organoboron compounds are essential ingredients for medicines and functional materials such as liquid crystals. In particular, because compounds with an oxygen atom existing very close to a boron atom can become the basic structure for medicines, researchers around the world have strived to develop a method to synthesize such compounds. However, success eluded them because of difficulties associated with designing catalysts.

The research team led by Professor Hajime Ito of Hokkaido University’s Graduate School of Engineering, who succeeded in synthesizing optically active organoboron compounds by the borylation of aldehydes a few years ago, used ketone compounds in this research. Ketone compounds are considered to be more difficult than aldehydes to use in asymmetric syntheses.

The team has been improving catalysts to synthesize optically active organoboron compounds since it developed a method for the borylation of organic compounds via a copper (I) catalyst in 2000. In this latest research project, the team members – mainly Dr. Koji Kubota and Shun Osaki of Hokkaido University – conducted experiments to find a suitable catalyst for the borylation of ketones. They found that a type of catalyst element called chiral NHC complex is suitable for the asymmetric borylation of ketones.

According to their findings, ketones reacted efficiently with diboron in the presence of a copper (I)/chiral NHC complex to furnish optically active organoboron compounds. More than ten different types of ketones reacted efficiently under the same conditions. The researchers analyzed how the catalyst works by analyzing the reactions using computational chemistry methods.

“Optically active organoborons formed by our methods can be used to synthesize candidate compounds for medicines and functional materials. The catalytic mechanism we revealed by computational analysis should help develop more efficient catalysts,” says the corresponding author Hajime Ito. The researchers plan to investigate whether the new method can be applied to other compounds such as ketimines, which are generally regarded as difficult to use in asymmetric syntheses.