This article was published in the Spring 2020 issue of Litterae Populi. The full list of articles can be found here. 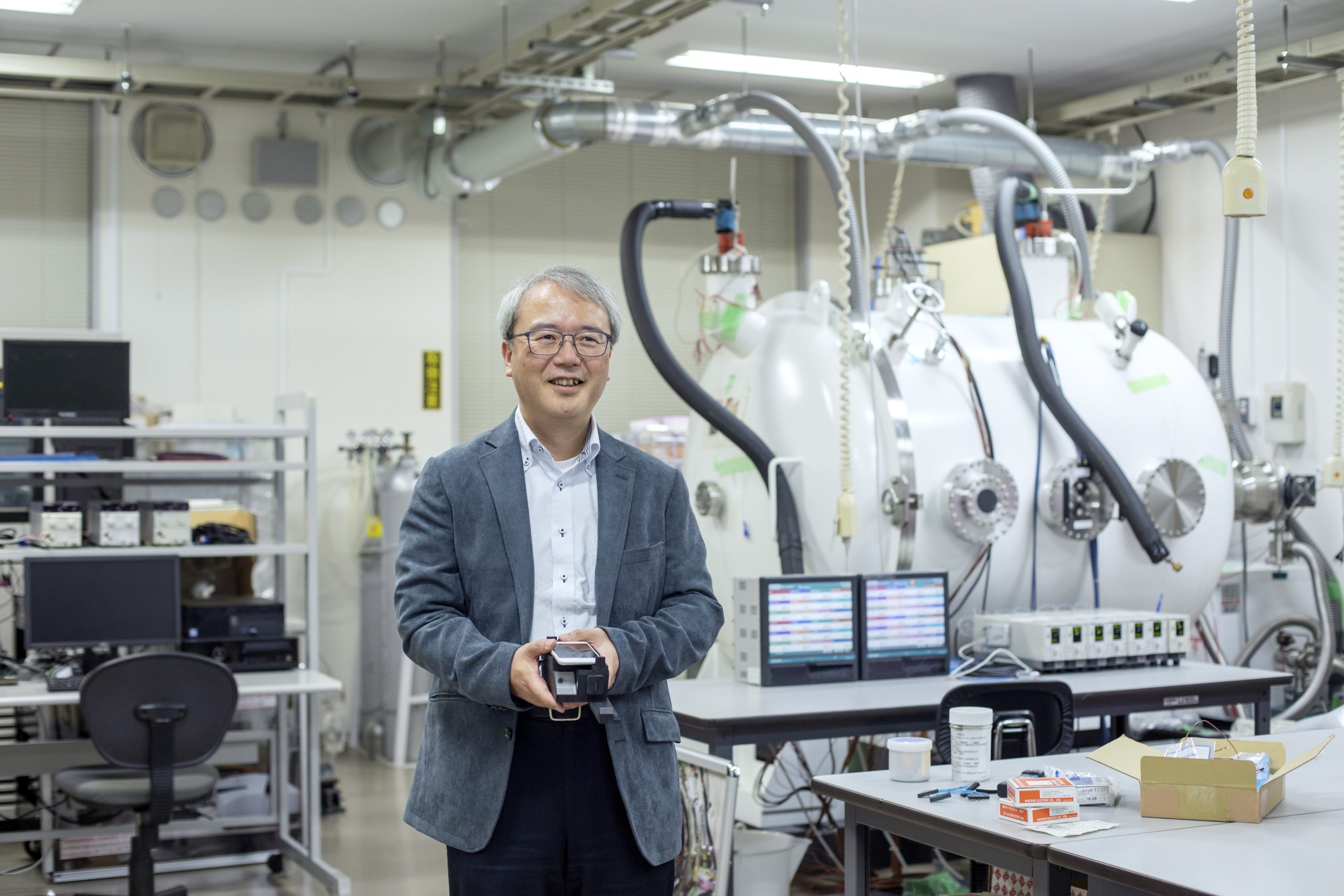 Yukihiro Takahashi in his laboratory at the Department of Earth and Planetary Sciences.

While remote sensing is applicable in a wide range of fields, an especially important example of application is “the observation of various global environments.” By receiving and analyzing electromagnetic waves reflected or emitted from the ground surface, it is possible, for example, to observe sea water temperature and forested areas on a continuous basis and monitor the progress of global warming. By focusing on remote sensing with such characteristics and making use of the world’s most advanced spectral measurement technology, Professor Yukihiro Takahashi of the Faculty of Science is addressing the development of technologies for farm crop growth and pest diagnosis using remote sensing.

“I became interested in astronomy when I read a gakushu manga (学習漫画, comic book for study). I decided to be an astronomer when I was in the third grade of elementary school,” says Professor Takahashi. After graduating from a high school in Chiba Prefecture, he entered Tohoku University. “I decided to enter Tohoku University when I was in junior high school. After entering the university, I became interested in studies of auroras and selected a geophysics laboratory.” After that, he entered the doctoral course of the university’s graduate school and stayed at the Showa Station in Antarctica for one year as a member of the wintering party of the Japanese Antarctic Research Expedition. He observed auroras there and wrote his thesis based on the data. Professor Takahashi then became a teacher at Tohoku University and encountered a research theme that motivated him to engage in the field of remote sensing. It is a phenomenon called “sprite.” In his words, “Thunder is a discharge phenomenon that occurs between clouds and the ground. Sprite is an almost synchronous phenomenon in which the emission of light occurs slightly later above the thunder, at a height of 40 to 90 km. An attempt to observe sprite occurring above the clouds from the sky above using an artificial satellite was planned.”

Professor Takahashi began to develop an artificial satellite for sprite observation. “Observation with the first satellite ended in failure, but the second one launched after that succeeded in various challenges. Of those, an achievement worth mentioning is the establishment of high- precision spectral observation technology by developing a camera (sensor) that can scan electromagnetic waves (visible light rays, near infrared rays) in a 1-nm wavelength step width. The camera itself is not especially new, but it was the first one for space in the world and I think its performance is the best in the world in terms of spectral measurement from space,” says the professor.

Toward the creation of an innovative remote sensing project

Following his research activities at Tohoku University (alongside which he earned his doctoral degree), Professor Takahashi was appointed to the Faculty of Science of Hokkaido University in 2009. “A teacher who was part of the same lab at Tohoku University moved to Hokkaido University. Since he was going to create a large telescope for observing planets and invited me to take part, I took a post at Hokkaido University,” says Professor Takahashi about the course of events. Since his appointment, he has been actively engaging in projects making use of high-precision spectral observation technology from past observations. One such project is the project on “Creation of innovative remote sensing based on spectral library’ by utilizing the spectral measurement technology of Hokkaido University,” which was adopted as a Regional Innovation Ecosystems Program by the Ministry of Education, Culture, Sports, Science and Technology (MEXT). 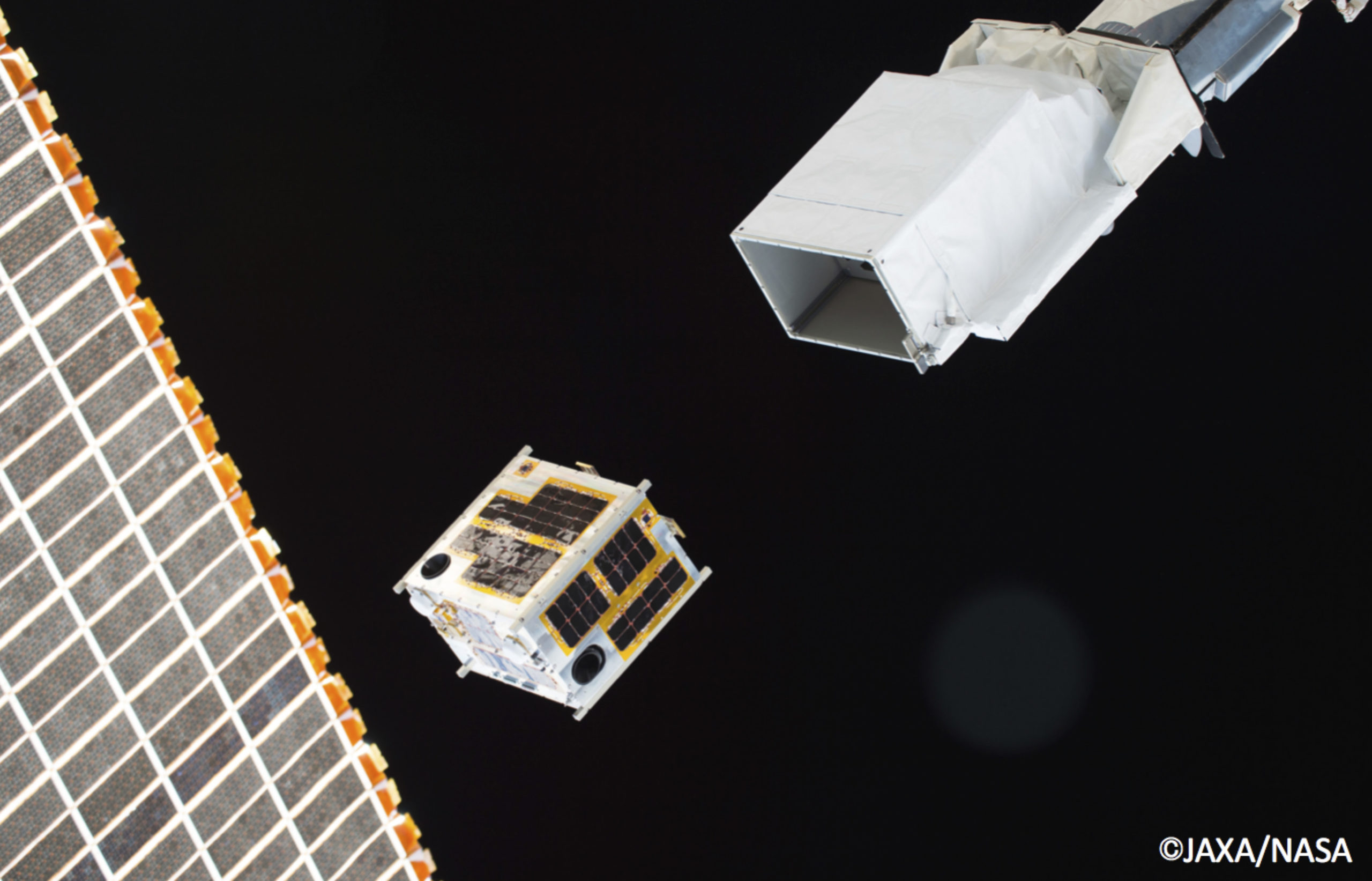 The moment when DIWATA-1, the first small satellite of the Philippines developed jointly by Hokkaido University and Tohoku University, was launched from the International Space Station (ISS).

In this project, accurate spectral measurement is achieved at a super-low cost by combining a spectral measurement method using a portable measuring instrument and a drone with the world’s highest-class performance spectral camera on a satellite. By using these, a spectral library that covers combinations of sunshine angle and camera direction will be established to significantly improve the accuracy of farm crop growth and pest diagnosis and increase observation frequency in actual operations.

By considerably improving cost effectiveness in this way, it is expected to be a feasible project. “It is a strategy to improve the quality of solution services by establishing a spectral library for all incident and output angles and realizing a spectral library platform by which data can be obtained by simply pointing the camera at any angle,” says Professor Takahashi. He will continue to address the world’s most advanced research toward the creation of an innovative remote sensing project by making use of high-precision spectral observation technology. 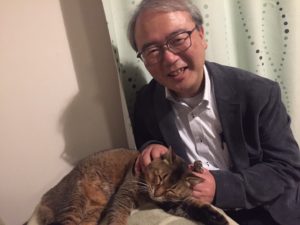 Yukihiro Takahashi at home with his beloved cat, in Kofu, Yamanashi Prefecture.

Doctor in Science. Specializes in earth and planetary science. Dropped out of the regular doctoral course of the Department of Geophysics, Graduate School of Science, Tohoku University. Earned a doctoral degree by submitting a thesis while serving as an assistant, teacher, and associate professor at the Graduate School of Science, Tohoku University. Appointed as a professor of the Faculty of Science of Hokkaido University in 2009 (current position). Further activity as a leading researcher of earth and planetary science is expected in the future.

This article was published in the Spring 2020 issue of Litterae Populi. The full list of articles can be found here.