Associate Professor Yoshizawa Kazunori of the Graduate School of Agriculture won the 2017 Ig Nobel Prize in Biology with three other researchers, Rodrigo Ferreira, Yoshitaka Kamimura, and Charles Lienhard, for their discovery of “a female penis and a male vagina in a cave insect.”

The Ig Nobel Prize, commonly seen as a parody of the Nobel Prize, honors achievements that “first make people laugh and then make them think.” Winners are announced every autumn and the award ceremony, attended by Nobel laureates, takes place at Harvard University. This year’s ceremony was held on September 14th and broadcasted live online. 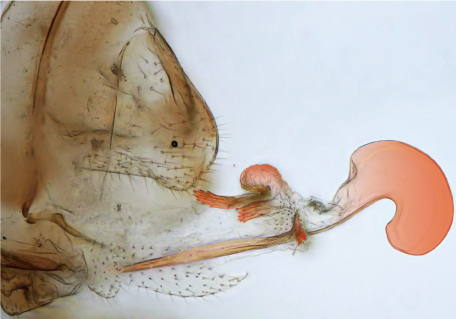 The female penis (shown in red) of Neotrogla curvata. Find out more on our press release here.

Yoshizawa and his collaborators reported the discovery of a female penis and male vagina in Brazilian cave insect genus Neotrogla in Current Biology in 2014, undermining the common assumption that a penis is a male organ and a vagina a female organ. In the paper, the authors write “The correlated genital evolution in Neotrogla is probably driven by reversed sexual selection with females competing for seminal gifts. Nothing similar is known among sex-role reversed animals.”

Although none of the four winners could attend the ceremony at Harvard yesterday since they were in the middle of a cave exploration in Japan, they sent a video acceptance speech saying “Our discovery made billions of dictionaries outdated.” One of the researchers explained “I peeped their sex life every 30 minutes and found that a female anchors a male by using her spiny penis for up to 70 hours.”

Recording of the award ceremony provided by Improbable Research on Youtube. The Biology Prize announcement starts at around 1:05:00.

Japanese researchers have won the award for eleven consecutive years, including Professor Toshiyuki Nakagaki of Hokkaido University, who won in 2008 and 2010 for his research on amoeboid organisms.