Jin-Min Nam and her colleagues are tackling with a class of cellular proteins called integrins which are known to enhance cancer radioresistance and invasiveness; a stumbling block in the fight against cancer. To address these problems, they focus on targeting integrins with gold nanoparticles as sensitizers, while unraveling the mechanism behind the radioresistance and increased invasiveness. 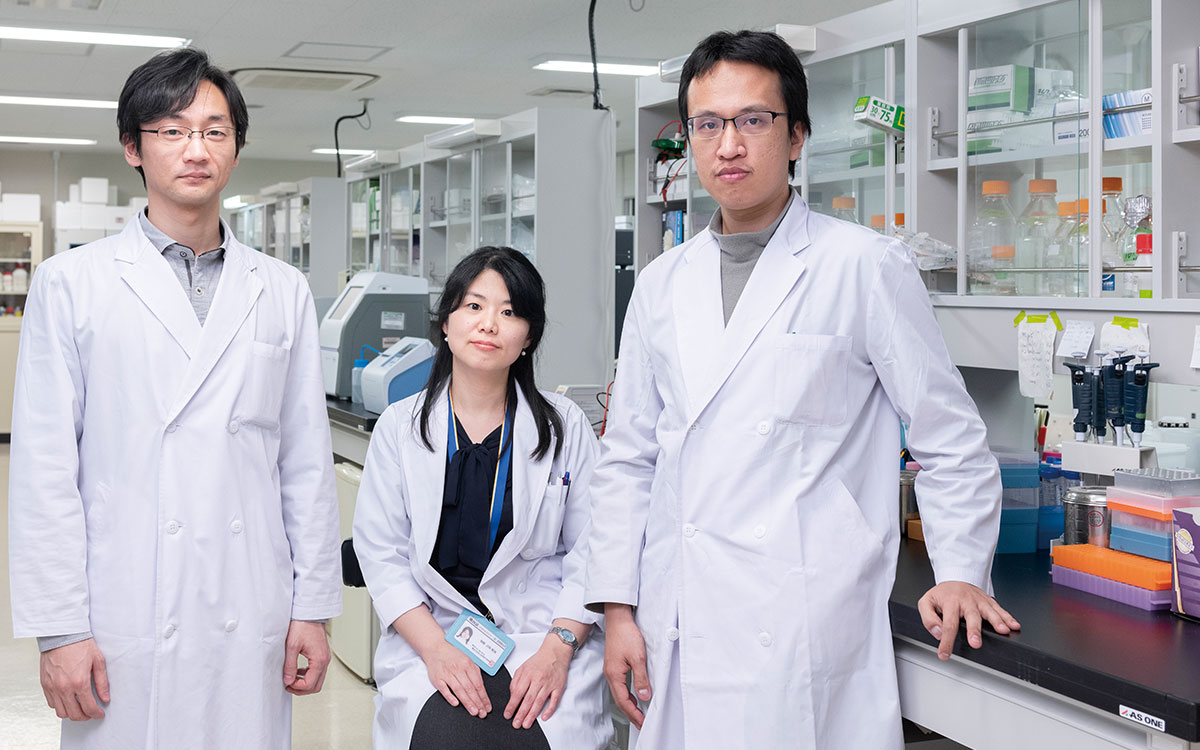 Integrins might sound unfamiliar to many people, but this class of transmembrane proteins plays an essential role in various biological processes and, in particular, adhering cells to other cells or extracellular material. But some integrins have properties disadvantageous to our fight against cancer because they enhance cancer’s radioresistance and invasiveness.

Cancer-facilitating integrins are one common theme being examined by an international team of researchers at Hokkaido University as they strive to prevent the metastasis of cancers and enhance the effectiveness of radiation therapy. Their current focus is two-pronged: targeting integrins with gold nanoparticles as sensitizers and identifying the mechanism behind radioresistance and increased invasiveness. The research projects involve Senior Assistant Professor Jin-Min Nam from South Korea; Senior Assistant Professor Yasuhito Onodera from Japan; and Ping-Hsiu Wu, a medical doctor from Taiwan currently affiliated with Hokkaido University’s Department of Radiation Medicine.

Use of gold nanoparticles effective

“We are trying to find ways to enhance the effectiveness of radiation therapy, and, in this research, we focus on gold nanoparticles as sensitizers,” Nam said. Although radiation therapy is one of the three major cancer-fighting treatments, it can trigger invasive recurrence and metastasis when a cancer cell survives the therapy. Researchers are urgently trying to unravel this acute problem. In recent years, gold nanoparticles have attracted attention as possible clinical agents for enhancing the effect of radiation therapy in various cancers. 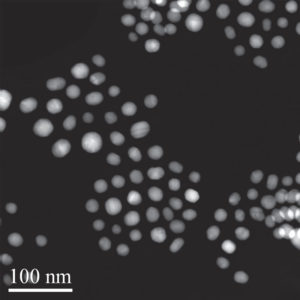 Nam explained the team’s achievements in layman’s terms. “A peptide attached on the surface of a gold nanoparticle helps it bind with integrins, which will then be able to enter the cancer cells,” Nam explained, adding that their research was based on cultured breast cancer cells. “It is important that we target certain types of integrins that are expressed specifically in invasive breast cancer cells. By doing so, we can accumulate gold nanoparticles inside of the invasive cancer cells efficiently.” The peptide they attach to a gold nanoparticle is part of another protein called fibronectin, which is known to bind with integrins. “We also found that radiation therapy together with gold colloid (a suspension consisting of nanoparticles in fluid) in cancer cells suppresses their invasiveness.”

Nam said using gold nanoparticles as sensitizers in radiation therapy enables a reduced dose to be irradiated in the body, thereby reducing side effects.

Wu provided research ideas from the viewpoint of a medical doctor. “In the past decade or so, there have been a lot of studies on sensitizers using rats, but none have been used for clinical research because they were not proven effective enough,” Wu said. “We are using gold nanoparticles in cultured cells, but eventually we’d like to use the sensitizer for clinical purposes and make it more cost effective.”

A gold nanoparticle with peptides binds to integrins on the cancer cell surface, and is then incorporated into the cell, where it enhances the effectiveness of radiotherapy. This method exploits a cellular system that circulates integrin molecules between the cell surface and inner cell.

Nam admits there are many unanswered questions regarding the use of gold nanoparticles as sensitizers for radiation therapy. For example, mystery shrouds its mechanism for suppressing radioresistance and invasiveness of cancer cells, but she cited one theory that gold nanoparticles facilitate ionization, affecting the production of reactive oxygen species (ROS), a type of unstable molecule that contains oxygen and easily reacts with other molecules, including DNA. Nam plans to study this mechanism and conduct further research to find out if gold nanoparticles are also effective in proton therapy.

Reactive oxygen species, or ROS, are known to increase in many cancerous cells, making cancers invasive and more aggressive. But if excessive ROS are produced inside cancer cells, it is harmful to the tumors themselves and the cells can die. In other words, ROS are a “double-edged sword” for tumors.

Onodera’s research examined the distribution of mitochondria in a cancer cell and the amount of ROS to unravel the mechanism of radioresistance in invasive cancers. Mitochondria are organelles found in large numbers in most cells and responsible for energy production. They also are known to produce ROS.

“Many researchers are interested in the fact that cancer cells become more sensitive to radiation when the function of integrins is inhibited,” said Onodera, who has been studying integrin recycling, in which the proteins circulate between the cell surface and inner cell. “So we decided to examine the mechanism behind it.” 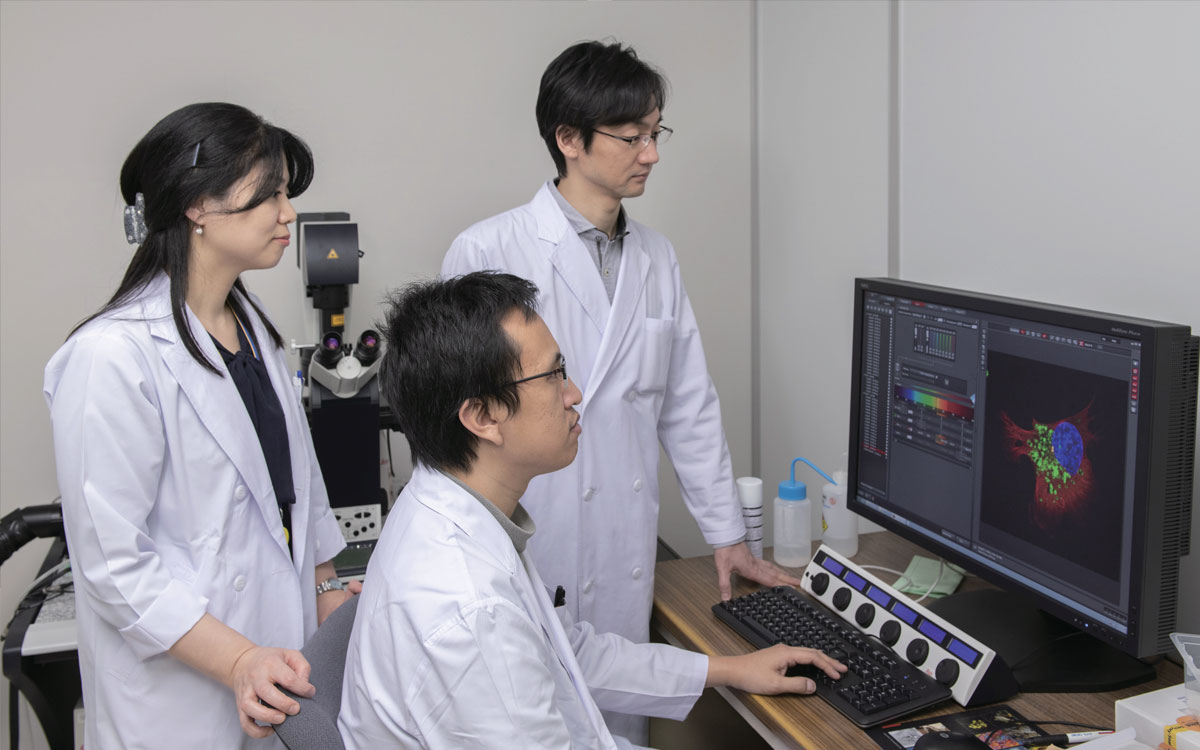 According to their study, a procedure to inhibit integrin recycling resulted in an accumulation of mitochondria at the center of a cancer cell, leading to an excessive production of ROS. Before integrins were blocked, smaller amounts of ROS were found and mitochondria were scattered inside the cell, which enables the cancer cell to utilize ROS for their invasiveness. The production of large amounts of ROS, on the other hand, sensitizes the cancer cells to radiation and suppresses their invasiveness, the researchers found. “We discovered that the distribution of mitochondria in cancerous cells and the amount of ROS production affect cancer invasion and radioresistance. Our data also suggests that the integrin signaling is essential for mitochondria distribution,” Onodera said.

“We can create a situation in which mitochondria accumulate near the nucleus, and thus increase the amount of ROS, which causes the cancer cells to destroy themselves.”

The three young researchers’ ultimate goal is for the results of their research to be used in clinical routines in the form of drugs or treatment methods, they said, so that in the future cancer can be conquered. 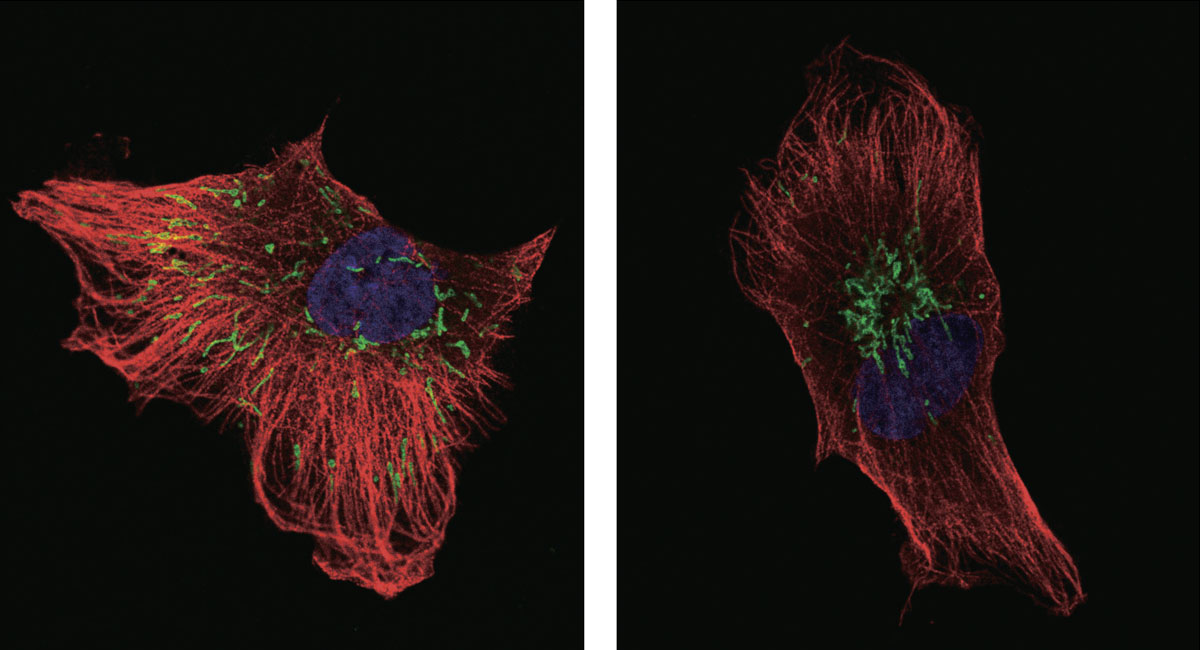