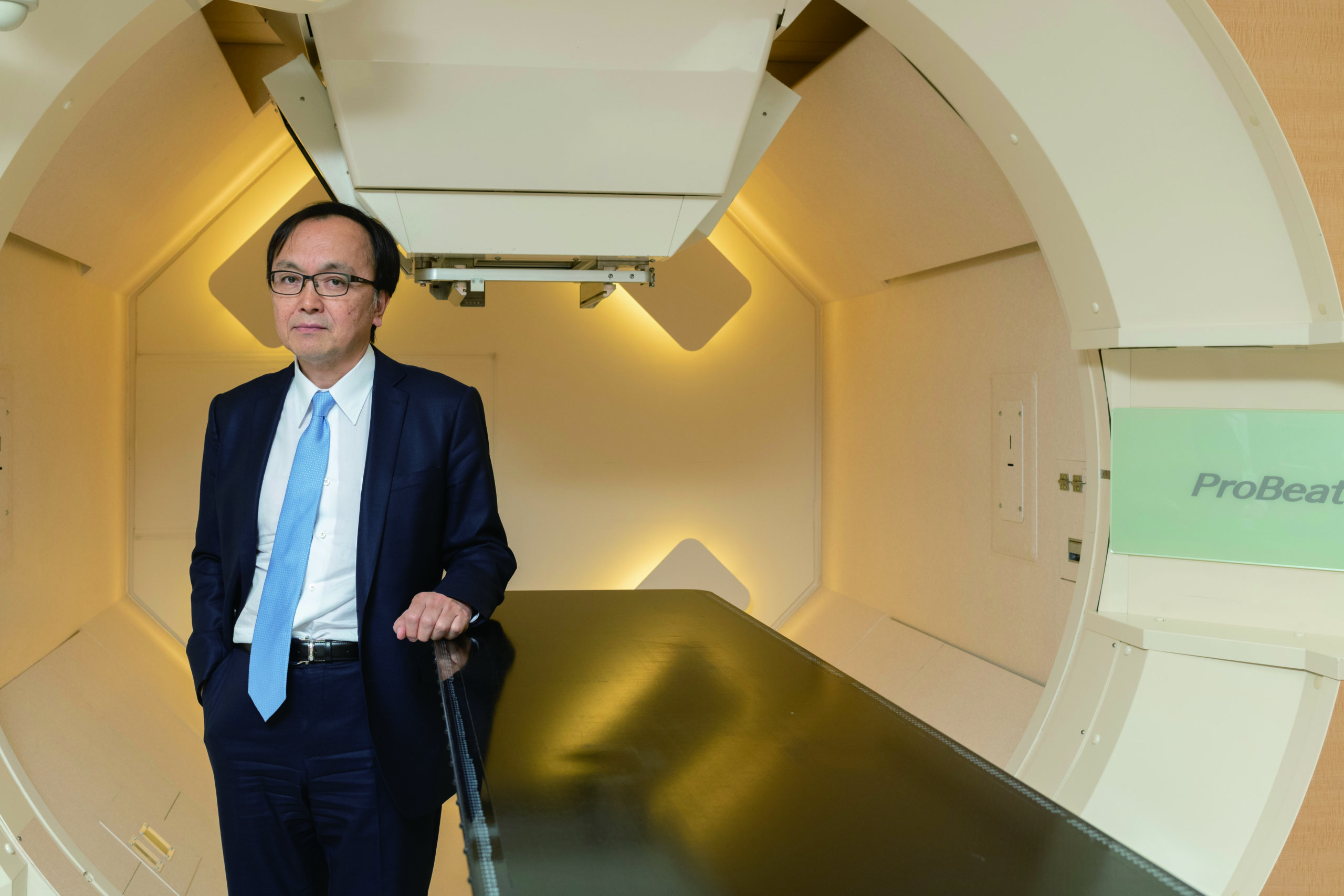 When he introduced the idea to make the world’s first real-time tumor-tracking radiation therapy (RTRT) system in the late 1990s, Professor Hiroki Shirato was met with skepticism and criticism from many of his colleagues.

“Despite their doubts, I was confident the system would work,” recalled Shirato. “In fact, I thought the outright rejection showed how original and creative the system was.” His idea was eventually put into practice in 1998 for radiation therapy using X-rays. Twenty years later his vision has been fully embraced by the medical community and is an integral part of Hokkaido University’s real-time-image gated proton therapy (RGPT) system, one of the most advanced radiation therapy systems in the world. The RGPT system, which fuses an upgraded RTRT system with discrete spot scanning technology from Hitachi, Ltd., was built in 2014 as part of the national Funding Program for World-Leading Innovative R & D on Science and Technology (FIRST).

The real-time tumor-tracking system is designed to locate, with millimeter precision, tumors in organs that are constantly “moving” due to respiration, peristalsis and other bodily motions. A two-millimeter gold ball is inserted near the tumor, then images of the diseased area are taken by computed tomography in order for the computer to learn the spatial relationship between the tumor and the gold marker prior to a radiation therapy. On the day of treatment, with the patient lying on a bed in the radiation therapy room, the gold marker is identified using fluoroscopy, or X-ray beams, coming from two directions, and its location is tracked automatically using pattern recognition technology. The proton beams are delivered only when the gold marker enters the gating window, therefore irradiating the tumor more precisely while avoiding unwanted irradiation of the adjacent healthy tissue. The system repeats this process every 0.03 seconds enabling precise tracking and irradiation.

In the treatment room, a patient lies on the bed and is irradiated with the proton beams while fluoroscopy is used to live-track the location of moving tumor. The equipment rotates 360 degrees to deliver the beam from any angle.

The use of a gold ball as a reference for irradiation, however, was the target of the original criticism, because there was little understanding at that time that a spherical marker could be located when irradiated by two X-ray beams set perpendicular to each other. There was also a doubt about placing the marker near the tumor, not directly on the tumor.

A gold marker to be implanted near the tumor (left). The tumor is irradiated only when the gold marker is in a certain position so as to reduce the dose delivered to healthy tissues (right).

“Before this system appeared, irradiating moving organs had to be done by guesswork because we were unable to see the moving tumor during the treatment. So, an advanced radiation therapy, called stereotactic radiation therapy, was mainly used for tumors in the brain, head and neck, and other organs that do not move,” Shirato said. “I was determined to fundamentally change how radiation therapy was conducted.”

The marriage of Shirato’s tumor-tracking system with the Hitachi’s spot scanning technology used in proton therapy achieved the breakthrough Shirato had aspired to because of the superiority of proton beams over X-rays for treating both static and moving tumors.

X-rays (left) deliver the largest dose of radiation near the skin and gradually lose energy as they approach the tumor before exiting the body. In contrast, proton beams (right) release most of their cancer-fighting energy around the tumor and then stop immediately.

Proton beams have much better dose distribution for treatment

Accelerated protons separated from hydrogen atoms expend the bulk of their cancer-fighting energy at a designated depth in the body while sparing nearby healthy tissue, thus minimizing side effects. In contrast, X-rays are composed of photons and deliver radiation both before and after reaching cancerous cells — to healthy tissue and organs alike. In some cases, X-rays are better suited for projections of the tumor for diagnosis than for therapy because they travel though the body. 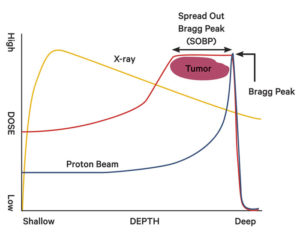 An X-ray releases the largest amount of energy shortly after entering the body, while a proton beam can be controlled to release most of its energy at a point called the Bragg Peak. The red line shows a proton beam with what is called a Spread Out Bragg Peak, which is created using a device to widen the Bragg Peak and irradiate tumors more effectively.

The advantage of using protons is that the doctor can control where the bulk of the energy is discharged by changing the speed of the particles released by the accelerator, ranging from 60 to 70 percent of the speed of light. The point where the greatest amount of energy is released is called the “Bragg Peak.” The proton enters the body by releasing small doses of radiation for a short time, then releases a large amount of radiation all at once near the tumor. After the Bragg Peak, the energy level quickly plummets to zero. X-rays, on the other hand, release the most energy 2 or 3 centimeters from the skin and then gradually lose energy as they approach the tumor before exiting the body.

Although proton beams are known to have excellent dose distribution, making the beam conform to the correct shape is another issue. In the conventional passive scattering method, a modulator and scatter foil are used to make the proton beam fit the shape of the tumor. A collimator, usually made of brass, and a resign compensator can be used to further shape the beam. However, these systems are incredibly large, requiring as much space as a soccer field when combined with the accelerator and multiple gantries, which was the standard size for proton centers globally.

In Hitachi’s spot scanning system, fine proton beams are used to “paint” a radiation dose onto a prescribed spot on the tumor, without the need for the special equipment used in passive scattering. In this system, the proton beams conform to the shape and the depth of the tumor, making it possible to effectively treat complex tumors such as those in prostate and brain, and those seen in children. The system also allows large tumors measuring up to 30 cm x 40 cm to be treated in a single session, while conventional facilities can only treat tumors up to 15 cm x 15 cm.

In the passive scattering method (left), special devices are needed to make the proton beam fit the tumor, while in spot scanning (right), fine proton beams are used to “paint” a precise radiation dose.

The Proton Beam Therapy Center has been treating prostate cancer, head and neck carcinoma (excluding pharyngeal cancer), bone and soft tissue tumors, and pediatric cancers that are covered by health insurance. It also offers treatment for tumors of the liver, lungs, pancreas and other organs that are not yet covered by health insurance. “In theory, any cancer that can be treated with standard X-ray therapy we can treat with proton therapy,” Shirato said “I expect more and more people will opt for proton therapy once the cost issue is settled.”

Clinical research has shown many outstanding results from proton therapy, often curing cancers previously declared incurable. For instance, a man in his 80s with inoperable hepatocellular carcinoma who received 20 proton beam treatments exhibited a drastic reduction in tumor size and a significant drop in tumor marker levels within three months after the treatment started. In a recent finding, patients with nasopharyngeal cancer reported not losing their sense of taste after proton therapy. “I was really surprised by this because patients with nasopharyngeal cancer who undergo standard radiation therapy always lose their sense of taste,” he said. “Reduced side effects could be a huge benefit of proton therapy. One of our faculty members has started quantitative research on this.”

A case of hepatocellular carcinoma in a male in his 80s. The images show the tumor before treatment, after 20 proton beam sessions and after three months. Levels of the tumor markers
AFP and PIVKA-II dropped as therapy progressed.

Soon after his project was selected to be part of the FIRST program, Shirato’s funding from the program was slashed in half due to a governmental policy change. With less funding, the team was forced to simplify the equipment so it could be housed in a space equivalent to two tennis courts, rather than the size of a soccer field. Further improvements to Hitachi’s spot scanning system increased proton beam usage efficiency, which made the equipment much more compact. The circumference of the accelerator was reduced to 18 meters, compared with the conventional 23 meters, while the gantry’s maximum outer diameter was reduced to 9 meters from 11 meters. Furthermore, because this system was the first in the world to only utilize the spot scanning method, and not also the passive scattering method, the thickness of the protective concrete wall could be drastically reduced.

“As the saying goes, ‘Necessity is the mother of invention’. The funding cut prompted us to do something to downsize the equipment, which in turn made it commercially viable. World-famous hospitals like the Mayo Clinic in the United States suddenly became interested in the equipment because they believed it could be accommodated in their buildings,” Shirato said.

In addition to the Mayo Clinic, the equipment has been adopted by the Singapore National Cancer Center, St. Jude Children’s Research Hospital and Johns Hopkins University Hospital, among others.

Under the leadership of Shirato, a team of doctors and researchers has continued striving to update the RGPT system. A key member of this team is Professor Shinichi Shimizu, vice-director of the Proton Beam Therapy Center, who was instrumental in developing the current system. Since 2015, the system has been capable of performing intensity modulated proton therapy (IMPT), which gives doctors electromagnetic spatial control of proton beams of variable energy and intensity. IMPT is effective in delivering precise doses of protons to complex tumors located near vital parts of the body. Later that year, the Proton Beam Therapy Center began using a Cone Beam Computed Tomography (CBCT) device mounted inside the gantry. CBCT is better at depicting normal tissue adjacent to tumors, in particular the location and shape of soft tissue, which enables more precise dose delivery.

Shirato says his immediate goal is to further disseminate this kind of proton therapy by finding a better way to teach doctors how to insert the gold markers, which can be difficult for beginners. “Beyond that, we are trying to find a radiation beam that is better than protons for cancer treatment,” said Shirato, whose desire to eradicate cancer is insatiable. “I am telling my students to come up with something so innovative that people will laugh at you at first.” 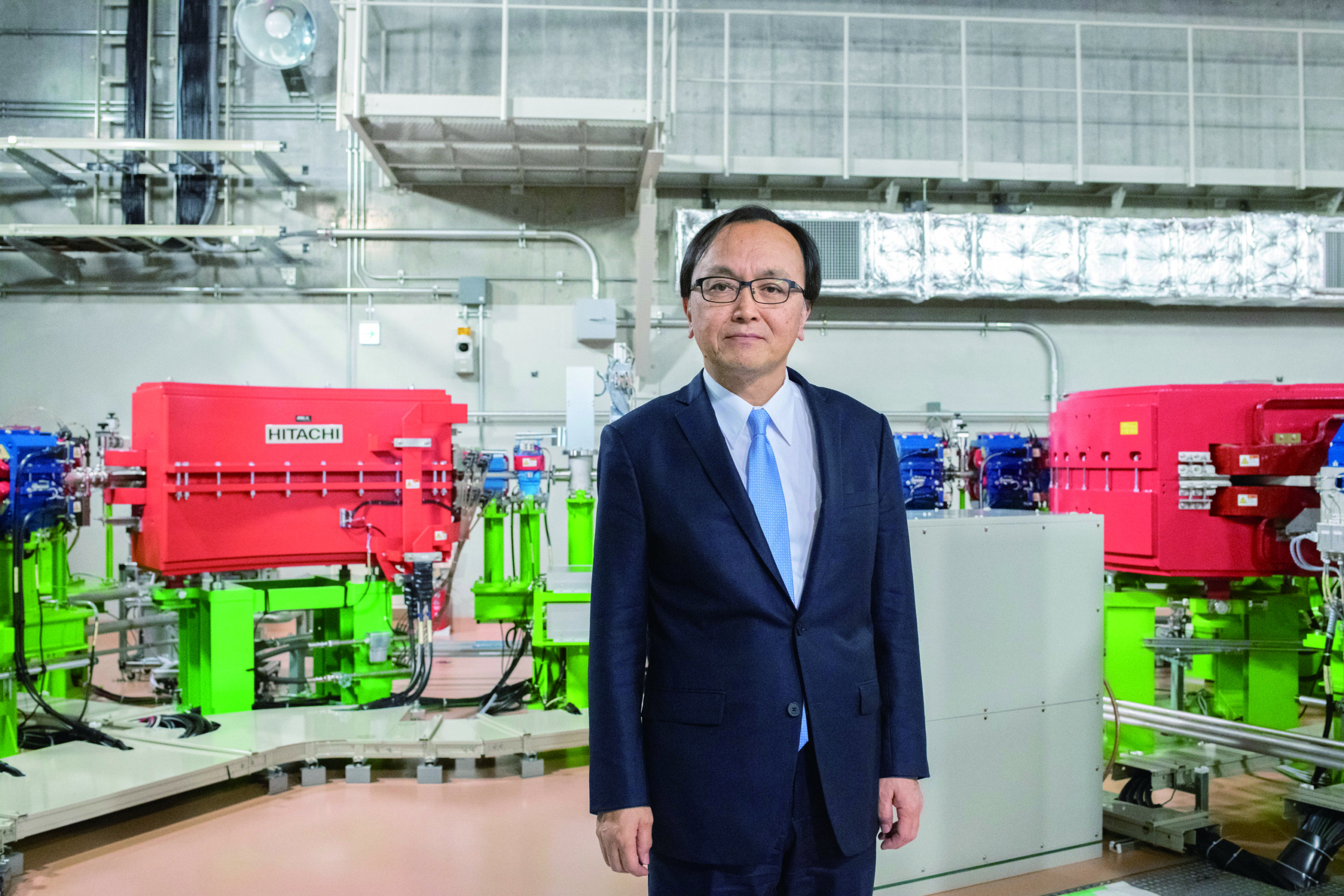 Patient treatment at the PBTC 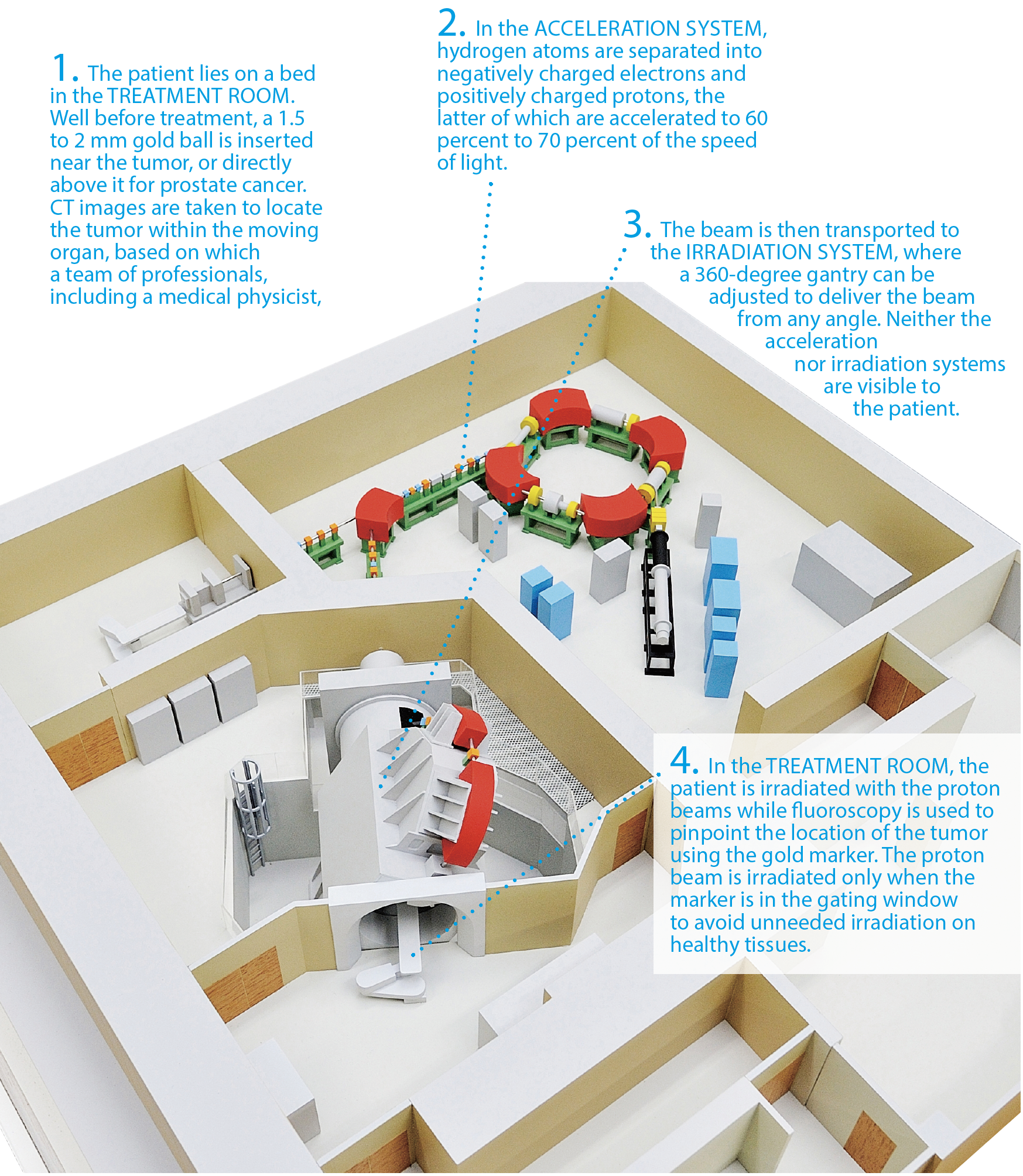