Researchers at Hokkaido University have revealed the effects of high pathogenicity avian influenza virus infection on an Ezo red fox and a Japanese raccoon dog, linking their infection to a recorded die-off of crows. 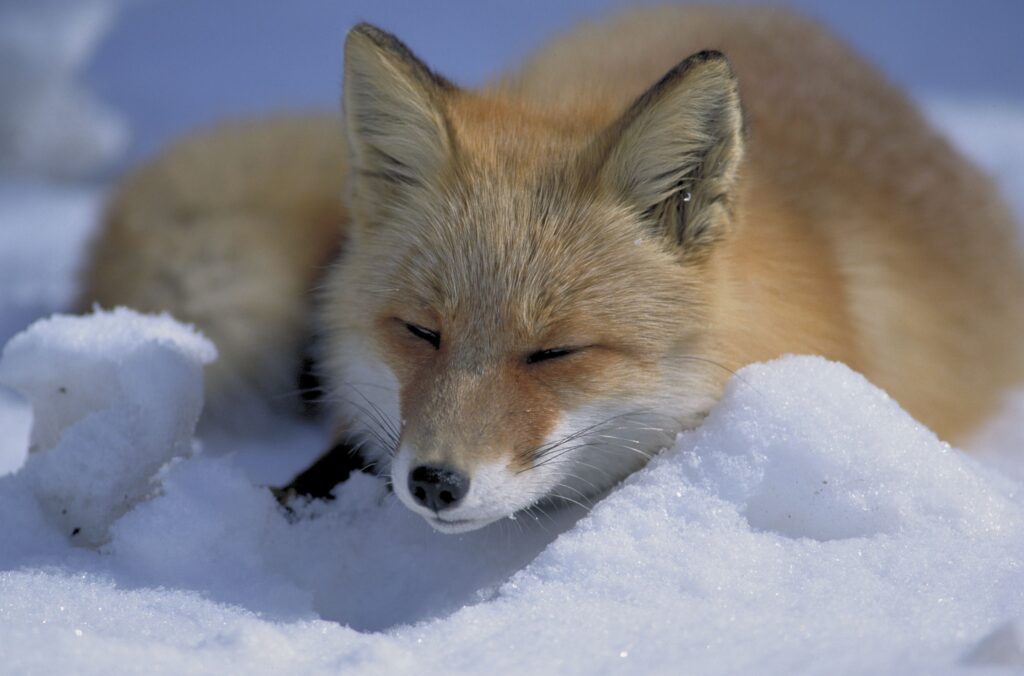 High Pathogenicity Avian Influenza (HPAI), commonly known as a type of bird flu, is caused by a group of influenza viruses that affect birds. Humans are very rarely infected by this virus. The most well-known HPAI viral subtype is H5N1, first reported in 1996 for its infection in geese, and then found in humans since 1997. A great amount of time and resources are devoted to monitoring and tracking the spread of HPAI across the globe, due to its disruptive potential on poultry farming—outbreaks are contained by culling exposed and infected flocks. 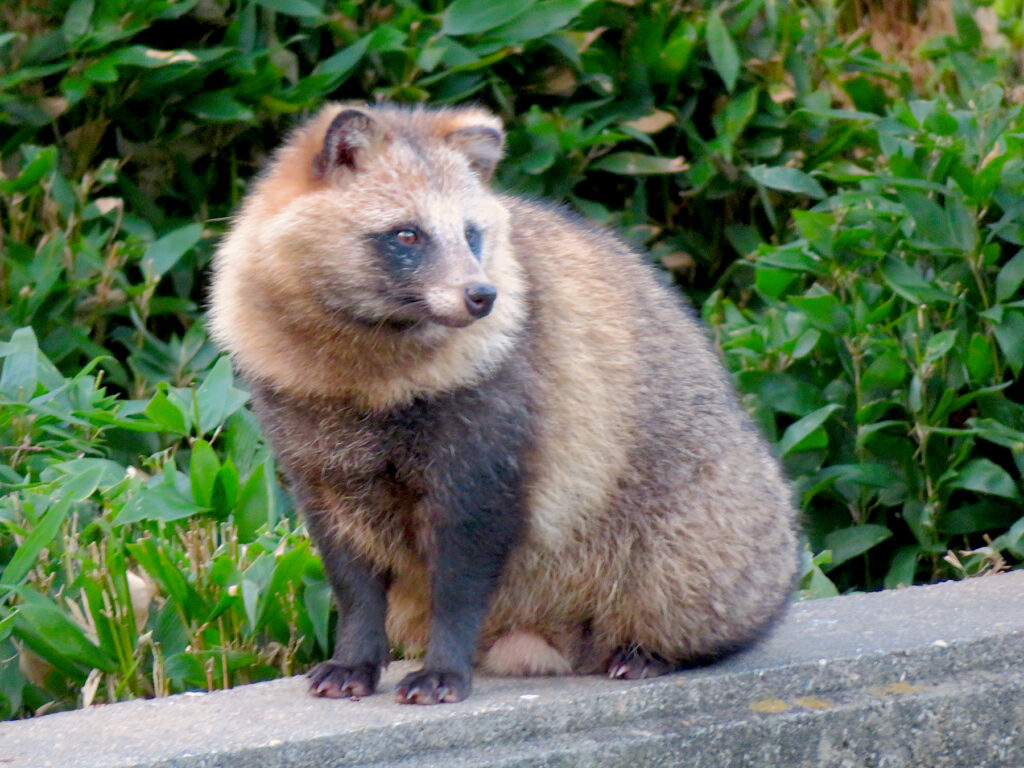 In the winter and spring of 2021-2022, wild bird monitoring programs revealed that H5N1 HPAI viruses were present across a wide swathe of habitats in Eurasia, Africa and the Americas. On March 29, 2022, a die-off of crows was reported in a public garden in the northern city of Sapporo, Japan. A dead Ezo red fox and an emaciated Japanese raccoon dog (tanuki) were also found in the same park shortly afterwards.

A team of researchers led by Professor Yoshihiro Sakoda at Hokkaido University performed post-mortem diagnosis and microbiological examinations of the crows, the fox and the raccoon dog to understand the cause of death. Their discoveries, which were published in the journal Virology, showed that it was highly likely that the fox and raccoon dog had become infected with the HPAI virus via contact with the diseased crows. However, as the route of contact was different, the effects of HPAI on the two canids were also different.

“The susceptibility of crows to HPAI viruses varies depending on the strain, but the current HPAI virus strain appears to thrive in crows. As a result, carnivorous mammals such as foxes are at risk of infection with HPAI if they consume crow carcasses. On the other hand, raccoon dogs primarily consume fruits, plant seeds, and insects, so it is believed that he was infected due to close contact with crow carcasses,” explained Takahiro Hiono, the first author of the paper.

The crows, fox and raccoon dog all tested positive for isolation of the H5N1 HPAI virus. Further analysis revealed that the viruses from all three sources were closely related to each other, although they were not completely identical. 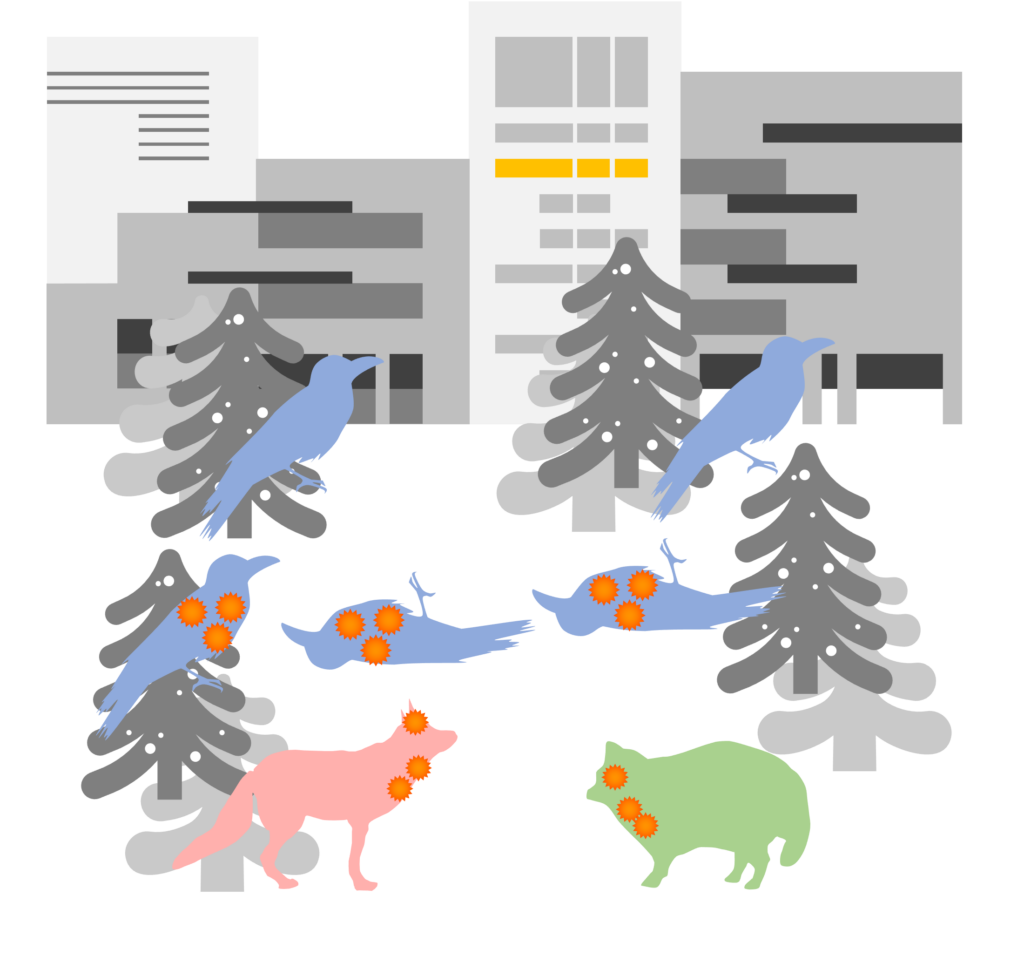 When the H5N1 HPAI virus (orange) affected a flock of crows in a public garden, it caused a mass die-off of crows. An Ezo red fox and a Japanese raccoon dog were also infected by the H5N1 HPAI virus, the former likely by consuming corpses of the crows, and the latter due to close contact with crow corpses (Illustration: Takahiro Hiono).

The fox and raccoon dog then underwent necropsies and their tissues were investigated under the microscope. The investigations revealed that the virus had infected the upper respiratory tracts of both the fox and the raccoon dog. The virus was also detected in the brain of the fox, consistent with reports from other studies. Interestingly, the raccoon dog had survived the acute HPAI virus infection, but the virus damaged its eyes—which resulted in a drastic reduction in its quality of life. A study of the cell receptors for influenza viruses in the respiratory system of the fox and raccoon dog also suggested that they may be intrinsically susceptible to HPAI virus infection.

“Recently, there has been an increasing number of cases of HPAI virus infections in wild carnivorous mammals. The expansion of HPAI viruses in nature is now having a detrimental effect on the ecosystem,” stated Hiono. “We need to expand our monitoring programs in order to gain a more detailed understanding of the ecology of HPAI viruses and identify potential risk factors for the spread of this virus in nature.”

The study did have some limitations, the most definitive of which was that only one individual from each species was studied. In addition, the intestines were not investigated as there was a risk of exposure to other pathogens.

This study was supported by the Ministry of Environment, Japan. This work was partly supported by the Japan Society for the Promotion of Science (JSPS) KAKENHI (21K14982); the Akiyama Life Science Foundation; the Japan Agency for Medical Research and Development (AMED) (JP21fk0108494, JP223fa627005); the AMED and the Japan International Cooperation Agency (JICA), within the framework of the Science and Technology Research Partnership for Sustainable Development (JP22jm0110019); the Japan Science and Technology Agency (JST) SPRING (JPMJSP2119); and the World-leading Innovative and Smart Education Program (1801) from the Ministry of Education, Culture, Sports, Science, and Technology, Japan.