Allogeneic stem cell transplantation can cause a loss of protective goblet cells from the colon’s inner lining, which can be fatal. But boosting those cells beforehand could improve the outcome.

A significant loss of the colon cells following a stem cell transplantation leads to bacterial invasion of the intestinal mucosa, affecting recipient prognosis. An injection with a growth factor of goblet cells prior to the transplantation could improve the outcome. This finding, by Hokkaido University researchers and colleagues, was published in the journal Science Translational Medicine.

Allogeneic hematopoietic stem cell transplantation involves transferring immune and haematopoietic system from a healthy donor to the recipient to treat haematological disorders such as leukaemia and lymphoma. However, some patients develop a donor immunity-mediated disease known as graft-versus-host-disease following the transplantation. The disease can be fatal in some cases, limiting widespread use of the treatment.

Hokkaido University haematologists Daigo Hashimoto, Takanori Teshima, and colleagues wanted to further understand what happens in the intestine during graft-versus-host-disease at the cellular level.

Through studies on mice, they found allogeneic haematopoietic stem cell transplantation can lead to a significant reduction in a type of epithelial cell in the colon’s inner lining called a goblet cell. These cells produce the protective mucus layer that prevents intestinal bacteria from crossing into the intestinal tissue and blood stream. The scientists found the reduction in mature goblet cells following transplantation disrupted the mucus layer they formed, leading to bacterial invasion of the intestinal tissue.

Further investigation revealed that an anti-microbial molecule called Lypd8, which is secreted by another type of colon cell and resides in the mucus, is lost in mice with disrupted inner mucus layer in graft-versus-host-disease. They also found that Lypd8 is necessary for IL-25 to have its protective effect. “These together show that the goblet cells inhibit bacterial invasion by maintaining the mucus layer where the anti-microbial molecule resides.”

Dr. Ara Takahide of the research team talks about their findings published in Science Translational Medicine. 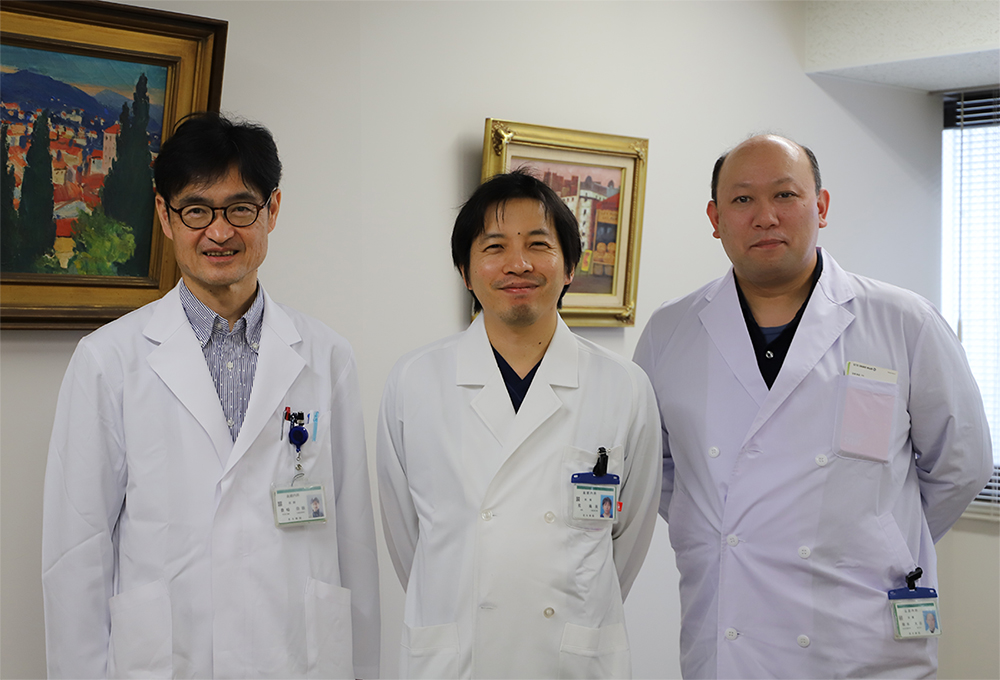 From the left: Takanori Teshima, Takahide Ara, and Daigo Hashimoto of the research team at Hokkaido University

This study was supported by the Japan Society for the Promotion of Science (JSPS) KAKENHI (17H04206, 17K19641, 17K09945), the Center of Innovation Program from Japan Science and Technology Agency (JST), and Mochida Memorial Foundation for Medical and Pharmaceutical Research.