Spotlight on Research: Boxing, Evictions and Poverty in the Philippines 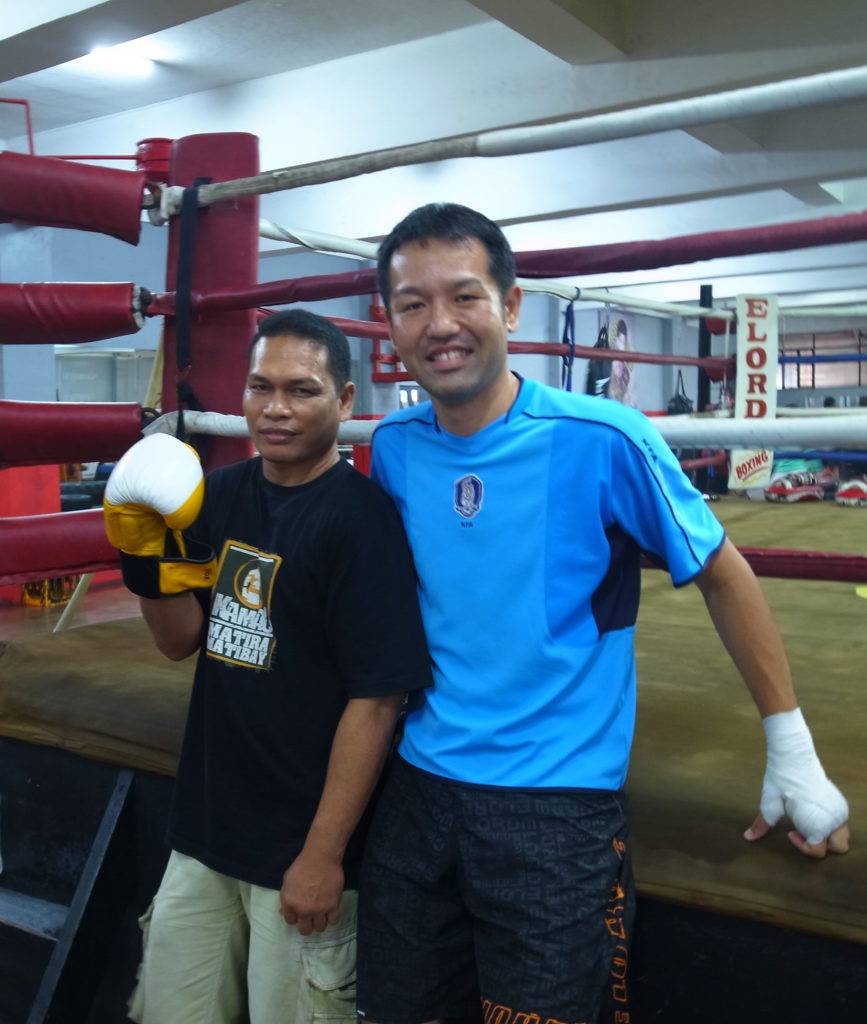 Dr. Tomonori Ishioka (right) with Alex Escaner, one of his boxer friends in the Philippines

“For a single event, there are many stories, many realities,” explained Associate Professor Tomonori Ishioka. “As a sociologist of the body and urban poor, it is my obligation to use theory to understand events and share to everyone the realities of the people who live at the social bottom—to share their history.”

For a large portion of his academic career, Dr. Ishioka has focused on the relationship between boxing in the Philippines and poverty. To thoroughly study this, he emphasizes the importance of taking ethnographic research further to include live-in research, physically experiencing and participating in boxers’ daily lives to understand their lives and perspectives

“’Live-in’ is a key word in my research. The boxing gym is a window to observe slum and shanty town life.”

He would go on morning jogs, eat breakfast, train, socialize, have dinner and sleep in the same quarters as the boxers in a gym located in Parañaque, Manila.

According to Dr. Ishioka, boxers usually have strong connections with shanty towns, and this is especially apparent after they retire. Facing the dilemma whether or not to stay in Manila because of the opportunities the city presents, retired boxers often end-up living in the city slums due to financial difficulties and poor educational background. They take up seasonal work in construction or become pedicab drivers. Even boxing managers take up side jobs, running a cock-fighting business or a nearby restaurant for example. 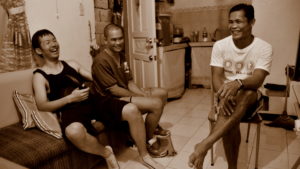 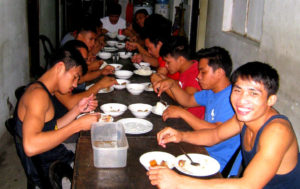 Dinner time with the boxers

About a decade ago, the capital of the Philippines, Manila, began experiencing rapid globalization and economic growth. The popularity of boxing in the country gave rise to new opportunities for retired boxers to become fitness trainers in gyms. “Boxing and fitness culture became the new fashion for the middle class.” Dr. Ishioka explained.

However, this economic boom led to new problems for those in the slums. Shanty towns are mostly located within city centers, and with the international urbanization of the city, the Filipino government and National Housing Authority began issuing evictions to those living in shanty towns to be demolished and relocating these people outside of the city.

When these initiatives began in the 1960s and 70s, relocation sites were fairly close to the then city center of Manila and have by now been reintegrated into the city; but nowadays, those who face eviction are being sent to areas so far from Manila that it makes it impossible to commute to work on a daily basis. Because of the convenient location, but also more so because people do not want to leave their homes, demolitions tend to turn violent. 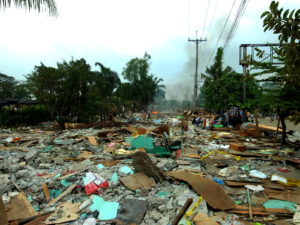 “In most cases, after relocation the husband moves to Manila. He lives with friends, or becomes ‘weekday homeless,’ meaning on weekdays he lives the homeless life—sleeps in jeepneys for example—and then he goes back to the relocation site on the weekends.”

Other than the discord this causes within families, this creates a number of social problems. Dr. Ishioka mentioned there is an increase in violence, and it is not uncommon for the men who work in Manila to spend their wages before the weekend on gambling, cock-fighting, and drinking. The women left at the relocation sites also turn to drugs and prostitution to earn money.

It is normal for extended families in the Philippines to live together, even the impoverished. The prospect of opportunity that cities offer draws people to move into the same household. On an economic level, these people live in poverty, but, on a social level, they have each other. They are able to confide in each other and build strong social networks. However, since relocation areas are located so far away from the city, this disappears. “Only loneliness, malungkot in Tagalog, and poverty are left.” Dr. Ishioka remarked.

Manila is experiencing economic growth, and this is great for many people; but the development of the city has created new poverty. Dr. Ishioka claims that the number of homeless people is now actually higher than before, contrary to how the situation may look initially. However, every story can be seen through different lenses—from the social bottom, through to the middle class, all the way to the upper echelons of society.

“I would like to tell a story of my friend, a former boxer,” Dr. Ishioka started. “He trained hard, had heart, and loved boxing, but boxing did not love him. So, he retired from boxing and became a fitness trainer in a shopping mall. If we think about this story with this information, we may think: ‘Great! The redevelopment of Manila created new opportunities for retired boxers. The situation is good!’ But after this, the homes of his relatives were demolished by the very same company he works for… There is no simple story.”

Dr. Ishioka regularly visits the Philippines and continues researching urban marginalities, the urban poor, poverty, and boxing. His work on boxers was published in a book titled Everyday Life of Underdog Filipino Boxers: Body Cultures Crafted in Destitution. His current study on evictions and the demolition of shanty towns has led him to start studying the social effects of tear gas, a chemical used against those who refuse to leave to-be-demolished shanty towns. He expects to publish this research in the coming years.